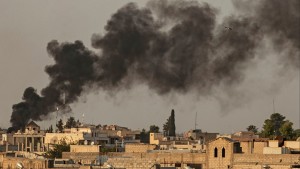 Yesterday, Turkey did exactly what it said it was going to do.

Launch a military operation against the Kurds – an ethnic group in the region. The Kurds have been a key US ally in the fight against ISIS for years. And have gained control of territory in northeastern Syria. But Turkey sees them as a terror threat. Earlier this week, Turkey's president told President Trump that it was getting ready to launch a military operation against them. Trump pulled troops out of the area and said the US would stay out of it.

Even though they're a US ally?

Correct. Which is why there's been pushback from both sides of the aisle. Trump says it's time for the US to stay out of endless wars. But many Republicans have criticized the president for abandoning the Kurds. And warned this could lead to ISIS gaining ground again.

Because thousands of ISIS fighters are being held by Kurdish forces there. And Kurdish forces have to now drop operations against ISIS to focus on fighting the Turkish offensive. Many are worried over who will take control of the about 11,000 ISIS prisoners. Trump is saying 'Turkey will take care of it'.

So it went full steam ahead?

Yep. Turkey launched airstrikes, fired artillery, and started a ground offensive against the Kurds. At least eight people have died, dozens have reportedly been injured, and thousands of civilians have fled. Kurdish forces are pleading with the US and other allies to impose a no-fly zone over the area in hopes of stopping airstrikes, saying they're "defenseless." Trump said the US "does not endorse this attack" but didn't signal if the US will help.

President Trump has taken his "America First" approach very literally – as seen by the admin's immigration policy, trade deals, and now this. But turning his back on American allies is a move that even his fellow Republicans can't get behind. It's putting the Kurds in immediate danger, threatening the stability of the region, and could have long-term effects on the US's relationships going forward.

Matt Lauer. A former NBC staffer has accused the former "Today" show host of rape. She had previously filed the complaint that led to Lauer being fired two years ago, though at the time NBC only described it as "inappropriate sexual behavior in the workplace." Now a new Ronan Farrow book provides more detail about what allegedly happened. She says Lauer raped her in a hotel room during the 2014 Winter Olympics. And that she was too drunk at the time to provide consent. NBC News called it "appalling, horrific and reprehensible." Lauer defended himself, saying the encounter was consensual and that he "never assaulted anyone or forced anyone to have sex. Period."

What the Justice Department has zero time for…

Leaks. Yesterday, a counterterrorism analyst was charged and arrested for allegedly leaking classified info to journalists. The Justice Dept says Henry Kyle Frese spilled secret details on a foreign country's weapons system to a journalist he was romantically involved with. And gave the journalist's colleague some other info. Back in August, law enforcement reportedly got the go-ahead from a court to tap his phone, and found calls and texts to the journalists. The department says Frese "was caught red-handed." It's the latest crackdown on gov leaks under the Trump admin.

Halle, Germany. Yesterday, a gunman shot and killed two people outside a synagogue there that was holding a service for Yom Kippur – the holiest day in the Jewish calendar. Officials believe this was an anti-Semitic attack by a "right-wing extremist." And said he live-streamed it – reminding people of the deadly shooting in Christchurch, New Zealand earlier this year. All this comes as the number of anti-Semitic attacks in Germany have been on the rise in recent years

Where the lights are out…

California. The state's largest utility PG&E is shutting off power for about 2 million people over concerns that extreme winds and dry weather later this week could spark wildfires if they down power lines. The blackout could last for days. This comes months after state investigators found that PG&E power lines started last year's Camp Fire that killed 85 people – making it the state's deadliest wildfire.

Skimm This: Our latest podcast ep goes into California's wildfire season and which areas are at risk.

When your day doesn't go as you planned…