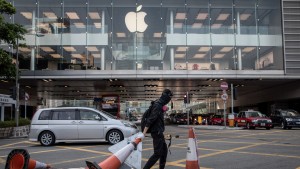 WHO RUN THE WORLD?

Looks like everyone and their corporate mother is pandering to China.

Of course. This is about Hong Kong, which, reminder: isn't fully a part of China. It enjoys some freedoms from the mainland, like free speech and its own legal system. But all that could change in 2047, when Hong Kong fully integrates with the mainland. In the meantime, every weekend since mid-June, thousands have been turning out in Hong Kong to protest what they see as eroding democratic norms there. No need to do the math, that's 18 straight weekends.

You're right, we're getting to that. As the world's second-biggest economy, China's got sway in everything from manufacturing to Hollywood to...the NBA.

Last week, the Houston Rockets' GM tweeted in support of the protesters. The NBA apologized but it was too late: its multi-billion-dollar relationship with China took a hit. Chinese partners suspended ties with the Rockets. The state broadcaster canceled plans to air NBA preseason games played in China – leaving the NBA stuck between a rock (see: Chinese money) and a hard place (see: free speech). It seemed to choose the rock.

Well, a lot of people weren't impressed with that – including US lawmakers. Then, after the NBA said 'we're all for free speech, promise', pro-Hong Kong protesters in the US were kicked out of an NBA game and had signs taken away in another. And a journalist was shut down from asking players how they felt about all this. Also, worth noting, it's not just the NBA who's trying to keep the cash flowing.

Meet: tech companies. Google recently pulled a game that lets people play as a Hong Kong demonstrator. And Apple shut down two apps. The first had a map that showed Hong Kong protesters where police were. The second was Quartz, a US-based news outlet that was reportedly removed in China because it contained content that's illegal there.

Money talks – in college admissions, in political campaigns, in the NBA, in trade deals, in paying off student loans, in...everything. China's economy gives it serious leverage around the world. Now we're seeing that power dynamic play out in the land of the free.

Who just won a Nobel Prize…

Abiy Ahmed. Today, Ethiopia's prime minister won the Nobel Peace Prize for his work ending the 20-year border dispute with neighboring Eritrea. Since Abiy became PM last year, he's also helped negotiate a power-sharing deal in Sudan and released thousands of political prisoners at home, among other political reforms. Still, parts of the country are racked by ethnic violence. This year alone, hundreds of thousands of Ethiopians were reportedly forced to flee their homes. The Norwegian Nobel Committee says it hopes that even though "some people" will think the award is premature, the move could help Abiy's government and "strengthen" his work for peace. Abiy beat out other top contenders for the prize, including 16-year-old Swedish climate activist Greta Thunberg.

Olga Tokarczuk and Peter Handke. Yesterday, the 2018 and 2019 prizes went to two European authors. The announcement came after last year's prize was canceled amid a sex abuse scandal involving the husband of a former academy member who helped pick winners.

The International Monetary Fund. A new report from the org says the best way to curb climate change is to implement carbon taxes – and that such policy measures could seriously slow down how hot the planet is getting. More than 40 governments have some form of price on carbon, and China's on track to do the same. But some of the other biggest greenhouse gas emitters (cough, the US and India) don't. Critics say this would up people's energy bills, especially those in poverty. The IMF says 'yea we thought about that' – but that the gov could redistribute the revenue to poorer citizens.

$: What's money got to do with it? Here's how a carbon tax could affect your wallet.

Who's got friends in tricky places...

Rudy Giuliani. Two of his associates were arrested for allegedly trying to funnel foreign money into US elections. And some of their alleged crimes have to do with Ukraine. The businessmen had helped Giuliani (President Trump's personal lawyer) try to dig up dirt on former VP Joe Biden. But they're in the hot seat for something different: illegal campaign contributions to Republicans, and for allegedly trying to get a Republican US congressman's help to try to oust the US ambassador to Ukraine at the time. It's unclear how this could impact the House's impeachment inquiry, though House committees issued them subpoenas.

What's getting a taste of the 21st century…

Iran. Yesterday, thousands of women there were allowed to attend a men's soccer game…a thing that hasn't been allowed in the country for 40 years. The change is thanks in part to FIFA, which had recently upped pressure on the Iranian gov to lift the ban for the World Cup qualifier game.

When your friend says they have zero weekend plans…

Drew you wanna try out a new TV show?