Daily Skimm: The State of Unions, Brexit, and the Blob 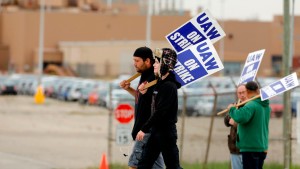 GM and the automaker's 49,000 union workers are trying to make it work.

I take that to mean things haven't been working...

Correct. A month ago, GM workers went on strike over things like pay, health care, and job security. And have been going off of less than $300 a week in strike pay. But now, a breakthrough.

It seems to be. Yesterday, the union repping them said it reached a tentative deal with the company that's expected to give workers bonuses. It reportedly might also let union workers stay on their health insurance, and provide a way for part-time workers to become full-time. But until union members sign off on it, it's not a done deal.

GM is one of the largest car manufacturers in the world. And analysts say this month-long strike has cost the company about $2 billion so far. But in a time when union membership is at a historic low, this is an example of the power they can still have for American workers

Today, tens of thousands of teachers are expected to go on strike in Chicago.

Assuming this is about their salaries?

That's part of it. But the teachers' union is also calling for smaller class sizes and better services for the city's thousands of students experiencing homelessness. The mayor says she's already offered concessions, including a big pay raise. And is blaming the union for the breakdown in negotiations – saying its demands would cost the city (read: taxpayers) billions of dollars.

So...what happens to the children?

Schools are still technically open – though teachers won't be around to teach. Administrative staff will be there to watch over kids, and breakfast and lunch will still be served. But school buses won't run and after-school programs will be suspended. Parents have had to scramble to adjust.

Chicago is the nation's third-largest school district. About 300,000 kids will be caught in the middle until the adults work this out.

What everyone is waiting to hear about…

This Brexit deal. Today, UK Prime Minister Boris Johnson said he'd reached a deal with the EU on how to carry out Brexit. Good timing, since Brexit is scheduled to kick in exactly two weeks. The deal still needs the go-ahead from EU leaders and UK lawmakers, which – given Johnson's tense relationship with the UK Parliament – isn't a given.

Rep. Elijah Cummings (D-MD). Today, the Baltimore congressman died at age 68. It's still not clear what he died from, but his office said it was tied to longstanding health issues. The son of two former sharecroppers, Cummings had spent 16 years in Maryland's legislature before joining Congress. As head of the House Oversight committee, he played a lead role in the impeachment inquiry into President Trump – and had clashed with the president on multiple occasions. In a time of heightened partisanship, Cummings was also known for his friendship across the aisle with Rep. Mark Meadows (R-NC). RIP.

What the House is throwing its weight behind…

Hong Kong. This week, it passed a bill supporting pro-democracy protesters there. For months, Hong Kong's been in a political crisis over concerns about China's growing influence in the territory. The crisis has even crept into the US (see: this). Earlier this week, tens of thousands of people turned out to call on US lawmakers to take a stand against China. The House said 'we got you' and passed a bill that pushes the US to impose sanctions on people who try to undermine Hong Kong's autonomy or abuse human rights there. China isn't a fan (shocking, we know), and reportedly says it "grossly interferes in China's internal affairs." Now it's up to the Senate to vote on a version of the bill.

…Oh and that's not all. Yesterday, the House voted to condemn President Trump's withdrawal of US troops in northern Syria.

Skimm More: Want more on Hong Kong's complicated relationship with China? We have a guide for that.

Why Sudoku may not be so helpful after all…

This new study. It shows that quieter brain activity may help you live longer. But it's just one study – and since it hits 'reverse' on what we thought was the case, scientists are going to look into it further.

When your friend isn't satisfied with their engagement photos…

Get off your high horse.