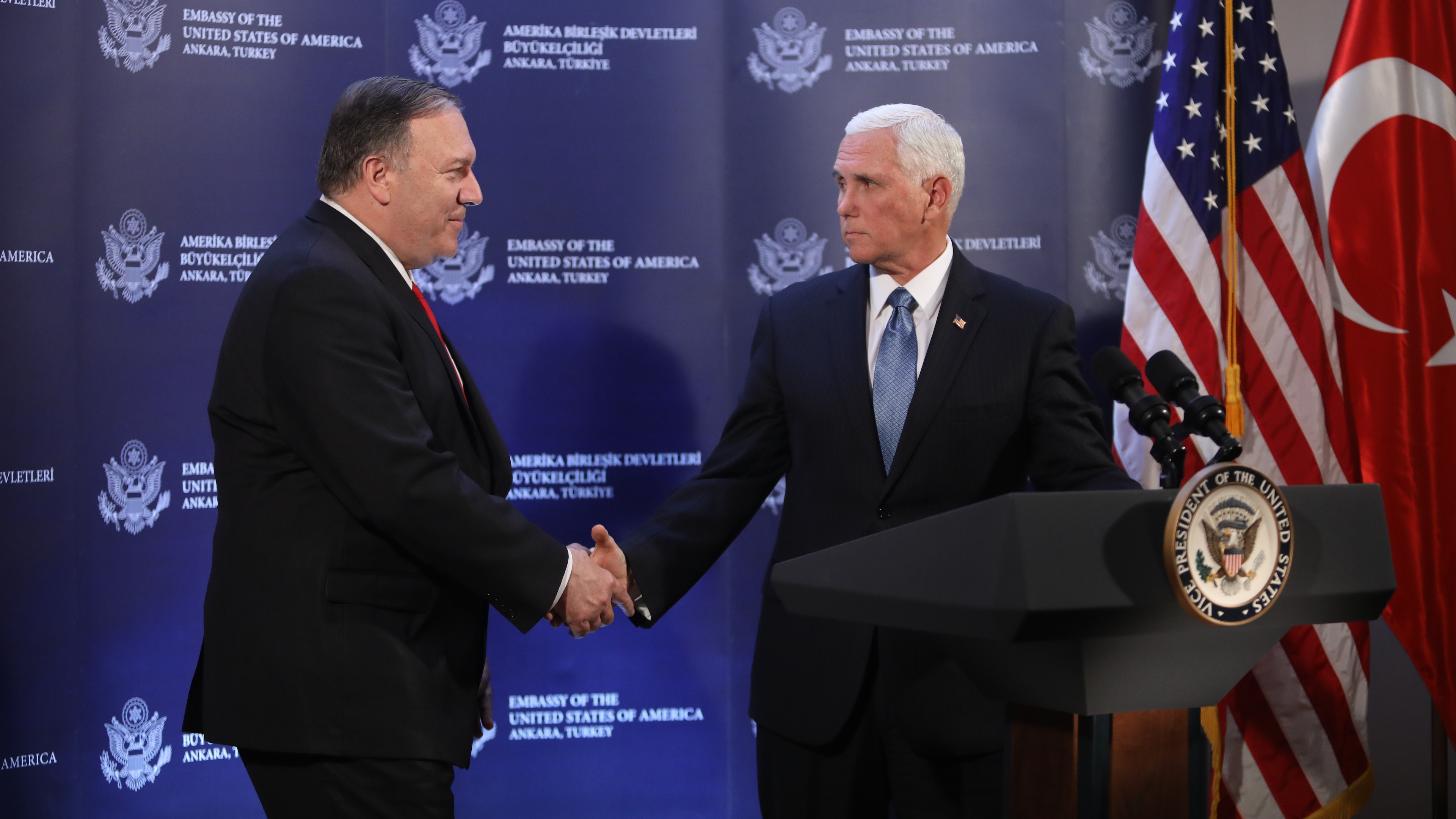 Turkey has agreed to a cease-fire in northern Syria.

It’s been nine days since Turkey launched a military offensive there. It says the goal was to take down the Syrian Kurds, a stateless ethnic group that Turkey sees as a terror threat. Awkward for the US, considering Turkey is a fellow NATO member and the Kurds have been a key US ally in fighting ISIS. But last week, President Trump announced he was withdrawing US troops from the area, leaving the Kurds to fend for themselves and sparking backlash from people across the political spectrum.

I remember. What’s happened since?

After said pushback, Trump wrote to Turkish President Recep Tayyip Erdoğan, telling him not to “be a tough guy” and that it was time to work out a deal to end the offensive. Trump sent VP Mike Pence and Sec of State Mike Pompeo to Turkey to talk things out IRL. Yesterday, after hours-long negotiations, Turkey agreed to a five-day cease-fire.

Kurds now have time to retreat roughly 20 miles from the border with Turkey. If that happens, Turkey would move forward with a permanent ceasefire, but wouldn’t be required to withdraw its troops. In return, the US would lift recent sanctions against the country. But Turkey’s been adamant that this isn’t really a cease-fire, it’s actually just a “pause” in its operation. And it seems that fighting has continued there today, despite the agreement.

Hm. How are people reacting to all this?

While Trump called yesterday’s news “a great day for civilization,” many see it as a win for Turkey. This offensive explicitly targeted a US ally, and as a result Turkey could control Kurdish-won territory for the foreseeable future, without giving up much in return. US lawmakers still want to move ahead with legislation to impose sanctions on Turkey. Meanwhile, the Kurds weren’t included in the talks – and some see this move as the US essentially surrendering on the Kurds’ behalf.

Trump’s attempt to get the US out of the conflict led to a violent offensive that killed dozens of people and displaced tens of thousands more. Now that the US is back in the picture, it’s allowing its Kurdish allies to be pushed out of territory they’ve been calling home.

Skimm More: We Skimm’d more about the Kurds in our guide.

Which Trump admin officials have your attention today…

Acting White House chief of staff Mick Mulvaney. Yesterday, he initially seemed to imply that there was, in fact, a quid pro quo between President Trump and Ukraine. Reminder: the House’s impeachment inquiry into Trump is in part centered on the president nudging Ukraine’s president to investigate former VP Joe Biden…while withholding aid for the country. Trump has said that there was no quid pro quo (as in you give me a Biden investigation, I give you aid money). But yesterday, Mulvaney seemed to admit there was – but that it wasn’t about Biden, it was about an investigation into a DNC server. Later, he said ‘scratch that, it wasn’t about the server.’ Do with that what you will.

Energy Secretary Rick Perry. Yesterday, he said that he’s Energizer Bunny-ing his way out of the Trump administration by the end of the year. The announcement comes as the House has been focusing in part on Perry for its impeachment inquiry into Trump – who says Perry’s the one who set up his highly scrutinized July 25 phone call with Ukraine’s president. Perry says he’s resigning as the country has made headway on energy independence. So now he’s Rick rolling on out.

…Oh and the Trump admin also said next year’s G-7 summit will go down at Trump’s Miami golf resort. Democrats are saying ‘corruption, much?’ The admin says Trump won’t profit off of it.

$: What’s money got to do with it? Here’s what impeachment could mean for your wallet.

What the UN has on its mind…

Venezuela. Yesterday, the UN General Assembly voted to let the country onto the Human Rights Council. Big deal, because the council’s 47 members set the tone on human rights issues around the world, and Venezuela doesn’t exactly have the cleanest record (read: it has a history of human rights abuses that orgs and even the UN raised red flags about). Add this to the list of reasons some are skeptical that the council has credibility on human rights.

Which crises are affecting teens…

Vaping. Juul has suspended all sales of its fruit-flavored products in the US. Last month, amid a teen vaping epidemic, the Trump admin said it was working toward banning flavored e-cigarettes. Juul has already banned some flavored e-cigs in retail stores. Now they’ll no longer be available online. Suicide. The CDC found that the suicide rate for kids and young adults (ages 10-24) went up more than 50% between 2007 and 2017. Researchers aren’t sure why this is happening. But some think a rise in depression and access to guns may be factors.

Who’s taking one giant leap for womankind into space…

Christina Koch and Jessica Meir. The first all-women spacewalk could happen as soon as today. Get excited. Or if you’ve been waiting for it for decades…stay excited.

While it’s the season for haunted houses…

There are also the eclectic options.