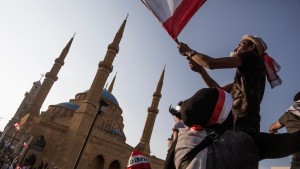 Over the weekend, Lebanon's Prime Minister Saad Hariri reportedly agreed to a set of reforms to calm a wave of unrest in the country.

What's the unrest about?

The country is suffering an economic crisis, with high unemployment and debt. Last week, Hariri introduced new austerity measures, including a proposed tax on apps like WhatsApp – which seriously upset people there. For days, thousands of protesters have turned out across the country, calling to replace the current gov that many see as corrupt.

Who will blink first?

The government. Yesterday, Hariri reportedly agreed on a set of reforms to help the dire economic conditions, including a salary cut for presidents, ministers, and lawmakers. And the privatization of the country's telecoms sector. The changes could be approved at a cabinet meeting today.

The anti-government protests are the largest demonstrations to happen in Lebanon in more than a decade. And have some wondering if these reforms will appease protesters, or if the country will go through an upheaval similar to those during the Arab Spring.

Violent protests are continuing in Chile, despite the gov's attempts to stop them.

Earlier this month, a subway fare hike went into effect, reportedly increasing ride costs by 4%. Students started protesting the hike and were joined by thousands more. Over the weekend, protesters clashed with police officers and set stores on fire. At least seven people were killed, and dozens injured. The president scrapped the fare hike, and the gov declared a state of emergency and imposed a curfew. But that didn't stop protesters, who are fighting against what they call rising costs of living.

What started as a protest against a transportation fare hike turned into a massive wave of unrest in Chile, with no end in sight. Protesters are calling for a national strike today.

Who's in need of an extension…

UK PM Boris Johnson. Over the weekend, UK lawmakers decided to delay a vote on Johnson's Brexit deal. As a result, Johnson (by law) had to ask the EU for a three-month Brextension. Note: Johnson has not been subtle about the fact that he wants to exit the EU ASAP. With or without a deal in place. He's hoping he can still make it happen by Oct 31. Because if the gov can't reach a deal in three years, somehow it'll figure it out in the next 10 days.

...Oh and that's not all that's going on across the pond. The UK's first Chick-fil-A closed days after opening because of pushback over the company's donations to anti-LGBTQ+ groups – something it's faced backlash for in the US too.

Where people are getting their 'I voted, eh' stickers…

Canada. The country's general election is going down today. In the race for PM: Liberal Party leader and current PM Justin Trudeau, and Conservative Party leader Andrew Scheer. Trudeau won the 2015 election by a landslide, and has since become known around the world as a progressive leader. But this year, he's been hit by some scandals that could hurt his chances of being re-elected. Think: a report accusing him of violating ethics laws, and revelations that he wore blackface and brownface when he was younger. On the other side, Scheer has struggled to gain momentum, and some voters worry he wouldn't do enough to tackle climate change – one of the top issues for voters. Still, polls show that the race is really tight. Prelim results may come in as early as tonight.

Why you should stock up on peanuts and Cracker Jack…

The World Series. The Houston Astros and the Washington Nationals are eyeing the title of World Series champs, with Game 1 starting tomorrow. While the Astros won back in 2017, this is the Nats' first World Series in franchise history.

When you thought we already reached peak '90s nostalgia...