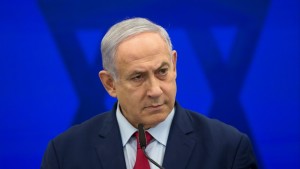 Why was he trying to?

Because back in April, Netanyahu's right-wing party failed to win the 61 seats needed for a parliamentary majority. He tried to form a coalition…but that didn't work out. So, a new election was held last month. And the same thing happened: no majority, no coalition.

So is Netanyahu giving up?

Essentially. And he's blaming it on rival Benny Gantz, the leader of the centrist party. Netanyahu says his own party made "every effort" to form a gov with Gantz's but Gantz was having none of it. Now Israel's president said he would give Gantz a chance to try forming a coalition gov – with 28 days to get it done. Otherwise, Israel could hold its third election in less than a year.

This is the first time in more than a decade that someone other than Netanyahu – Israel's longest-serving PM – has a chance to lead the government. And leaves the future of Israel's politics up in the air.

Looks like Canadian Prime Minister Justin Trudeau is staying put for another term.

What's going on there, eh?

Yesterday was the country's general election, with 338 parliamentary seats up for grabs. Heading into it, it was a tight race between Trudeau, the Liberal Party leader, and Andrew Scheer, the Conservative Party leader. Since Trudeau first came into office in 2015, he's legalized marijuana, worked out a new trade deal with the US and Mexico, and has become known as a progressive leader on the world stage. But he's been hit by scandal after scandal this past year, including allegations that he interfered in a corporate corruption case and revelations that he wore brownface and blackface in the past. And some thought it might have been enough to sink him.

Apparently not. But his party seems to have only squeaked out a win and he's expected to lead a minority government. Meaning he'll have to team up with smaller parties to get things done.

Canadians have complained that the election cycle has been more about attacking candidates and less about real issues. Now it's up to Trudeau to prove that he's ready for another opportunity to deliver on top issues like climate change, health care, and taxes.

This settlement. Yesterday, four drug companies reached a $260 million deal with two Ohio counties. This was set to be the first federal trial over the opioid crisis – and was supposed to serve as a test trial for the thousands of other lawsuits pending against drug companies across the country. Gov officials in Ohio reportedly say the settlement money will be used for social service programs and funding for first responders.

Who's got a brand new plan…

Facebook. Yesterday, the company said Iran and Russia have been involved in foreign interference campaigns on its platforms ahead of the 2020 election. But Mark Zuckerberg doesn't want you to deactivate your account just yet. The company unveiled new plans to help fight interference. Some highlights: labeling state-controlled media pages and banning paid ads that encourage people not to vote. But banning political ads that include false info is not included. It says it'll make it more obvious when something may be false or partially false, and will let users "decide for themselves what to read, trust and share."

Who's in hot water…

Sunday Riley. Yesterday, the skin care brand settled with the FTC over reports it had asked employees to post fake reviews of its products on websites like Sephora. While Sunday Riley won't have to pay up or admit to any wrongdoing to its customers, the FTC is requiring the brand to be transparent about endorsements.

Who should be the new face of Marvel…