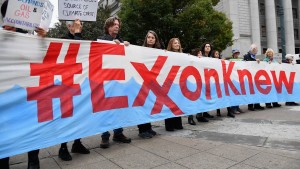 Yesterday, one of the first trials in the US around climate change kicked off.

Exxon Mobil. A year ago, New York's attorney general sued the oil company for allegedly lying to its own investors. The case is based on a years-long investigation into the company, and the trial will last up to three weeks.

What did Exxon allegedly lie about?

How climate change regulations could affect its business. Exxon allegedly had two sets of numbers for pricing carbon when taking potential gov regulations into account. Investors saw the higher numbers, and Exxon internally held onto the lower numbers. Meaning that investors were being deceived over whether Exxon was a better investment than it may have actually been. It's estimated to have cost shareholders between $476 million and $1.6 billion. Exxon says 'don't look at us, we didn't do anything wrong' – and that the allegations are politically motivated.

Oh, that's not all. Shortly before the trial started, a team of researchers released a new report detailing how Exxon and the fossil fuel industry knew the dangers of climate change for decades, and tried to cover them up from the public. The report claims Exxon spent millions of dollars to try to "obscure the scientific reality" through disinformation campaigns. And compared it to the tobacco industry trying to hide the negative health effects of smoking.

This case is seen as a potential strategy for how to hold fossil fuel companies accountable for climate change. And could set a precedent for how similar cases play out going forward.

The Turkey-Syria border. Yesterday, Russia said it would help Turkey maintain control of the area. Earlier this month, Turkey led a military offensive there against the Kurds, which the country considers a terror threat. While the Kurds were forced to retreat from the border area under a cease-fire, this new agreement allows Russia to help force them further away. And to work with Turkey's forces to patrol the border starting next week. The agreement solidifies Russia's role in the region as it buddies up with Turkey – and adds to the list of reasons why President Trump has faced criticism over his decision to pull US troops out.

Whose tweets are making headlines…

President Trump. He compared the House's impeachment inquiry into him to a "lynching." The comment sparked pushback from people across the political spectrum, and many were quick to remind the president that a congressional inquiry is nothing like the thousands of racially motivated murders against black people in the 19th and 20th centuries. The White House said Trump wasn't comparing the inquiry to "one of our darkest moments in American history." And that he was explaining "the way he's been treated by the media."

Finalizing a Brexit deadline. Yesterday, UK lawmakers approved PM Boris Johnson's deal to leave the EU in principle. But they rejected the timeline they had to approve all the terms and conditions. Because no one likes to be rushed. The European Council president also said he'll recommend giving the UK a three-month extension, meaning it's not likely Brexit will happen by next week's deadline.

The head of Boeing's commercial airplanes. He's the first high-level employee to be ousted as a result of the scandal over two deadly 737 Max plane crashes.

…Oh and he's not the only one writing a sign-off email. Yesterday, it was announced the CEOs of Nike and Under Armour are stepping down.

What's canceled in more ways than one…