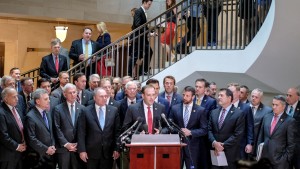 Yesterday, about two dozen Republican lawmakers stormed a secure room for closed-door hearings, delaying a Defense Department official from testifying. Most of them aren't part of the committees conducting the inquiry – aka they weren't authorized to be there.

So why'd they do it?

Because some have said that Dems are being too secretive by holding private hearings and that they have the right to know what's going on. They've also complained that the inquiry isn't legit because the House never held a formal vote to launch it, as it typically has done in the past.

And the Dems' defense?

That closed-door hearings can be crucial for information gathering, and they prevent witnesses from coordinating their statements. And that transcripts will be made public in due time.

This impeachment inquiry has become a partisan battle on the Hill. And earlier this week, President Trump said that Republicans need to take a stronger stand against it. How'd they do

We see what you did there. If there's one thing that brings lawmakers together, it's criticizing (and barely being able to understand) Facebook. So it's not surprising that they're skeptical of its planned digital currency Libra. Facebook thinks the estimated 1.7 billion adults around the world who don't have access to a bank account could benefit from it. Lawmakers have been worried about a giant tech company getting more influence. So they invited him to the Hill for a chat.

Not great. Zuckerberg admitted that companies like Visa and PayPal dropped out of Libra because it was a "risky project." And that Facebook won't move forward with the project unless US regulators give it the thumbs up. Other topics of conversation: Russian interference, the company's diversity problems, and fighting child exploitation online.

Libra has a lot more work to do before it plans to launch next year. But lawmakers are outdoing themselves to show they don't want the billions of people who use Facebook or its other services (think: WhatsApp, Instagram) to get roped into something risky.

$: What's your money got to do with it? Here's what Libra could mean for your wallet.

Where people have taken to the streets…

Bolivia. Earlier this week, people in the South American country voted on whether to re-elect President Evo Morales for a fourth term. His supporters like the economic growth under his leadership. But many are concerned about gov corruption, his influence over the press, and his seeming to ignore a 2016 referendum on term limits. At first, the election looked like it could've headed to a runoff between him and the leading contender, former President Carlos Mesa. But then, things took a dark turn...literally. Election officials went dark on sharing results for about 24 hours. When they came back, the results showed a wider lead for Morales, causing many to say 'rigged, much?' This led to protests and calls for a runoff. Meanwhile, Morales has used the opportunity to declare a win and announce a state of emergency.

What's not facing the consequences...

Turkey. Yesterday, President Trump announced he was lifting the sanctions imposed as punishment for Turkey's offensive in northeastern Syria. This week, Turkey said it stopped advancing into the area after coming to an agreement to share patrol duties with Russia. Trump gave the US "and nobody else" credit for brokering what he calls a permanent cease-fire. But many see the whole situation as a big foreign policy fail, starting when Trump seemed to give Turkey the green light to attack the US's Kurdish allies.

Google. The company says it's reached peak "quantum supremacy." Google Translate: it can solve a problem in 200 seconds that would take a top-notch supercomputer 10,000 years to solve. IBM's saying 'OK Google, what's the definition of exaggeration?'