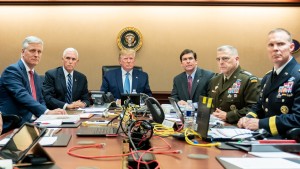 The world's most wanted terrorist is dead.

ISIS leader Abu Bakr al-Baghdadi. He was responsible for taking the terror group from a little-known insurgency to a global threat. In 2014, he declared himself leader of a "caliphate" (Islamic state) in Iraq and Syria. At its peak, it controlled an area the size of the UK.

That's a lot of land.

It is. And the group inspired or was responsible for multiple terror attacks under al-Baghdadi's reign – from San Bernardino, California to Nice, France and beyond – and tortured and killed American hostages. But in recent years, the group lost ground in the Middle East.

Let's go back to al-Baghdadi. What happened?

President Trump said that a team of US special forces raided a compound where al-Baghdadi was believed to be hiding in northwestern Syria. US troops attacked the compound and al-Baghdadi fled to a tunnel where he set off a suicide vest. Trump says the military has DNA samples to prove they really got him, despite rumors he could've been killed in the past. No US troops were killed in the raid.

Yup. All this is seen as a major foreign policy win for Trump. But Dems aren't too happy they didn't get a heads-up about the raid. Trump has also recently faced pushback for pulling US troops from northern Syria ahead of Turkey's offensive against Syrian Kurds – a key ally in the US's fight against ISIS. One key criticism was that the move could leave a vacuum for ISIS to regain steam. Another was that the US was leaving its ally to fend for itself in the offensive. Worth noting the Kurds assisted the US with the al-Baghdadi raid.

So what does all this mean for the future of ISIS?

The death of its leader is a major and long-sought win. But some experts warn this may not be the end of the group. Over the years, it's adapted by establishing cells across multiple countries and focusing on online radicalization.

This has reminded some of the operation that led to al-Qaeda leader Osama bin Laden's death in 2011. Both took out the world's most wanted terrorists after their groups had adapted into more decentralized structures. But it remains to be seen what ISIS's future will be without its notorious leader.

Who people are thinking of…

John Conyers. Yesterday, the former Democratic congressman from Michigan passed away at 90 years old. Conyers had been the longest-serving black member of Congress in US history. First elected to the House in 1964, he joined only a handful of other black House members and spent decades promoting civil rights issues. He helped co-found the Congressional Black Caucus in 1971 and pushed to establish Martin Luther King Jr Day as a national holiday. He was also concerned with gun violence and policing issues, and had long advocated for a national health care program. In 2017, he resigned amid accusations of sexual harassment against multiple female staffers, including allegations that he inappropriately touched women. And a former staffer has alleged she was fired for rejecting his advances. Despite all this, the Rev. Jesse Jackson reportedly called Conyers "one of the most consequential congressmen."

Where things are on shaky ground…

Argentina. Yesterday, voters went to the polls to elect a new president. They sent President Mauricio Macri packing. Instead they gave the win to Alberto Fernández, putting a populist party back in power. Voters are hoping he can turn around Argentina's struggling economy, which is the third largest in Latin America. It's been dealing with a recession and was bailed out by the IMF last year.

Iraq. At least 50 people were killed in clashes with security forces this weekend. This is part of ongoing protests that started earlier this month over corruption and the lack of job opportunities there. Protesters are also calling for the Iranian-tied government to resign.

Chile. This weekend, the country's President Sebastián Piñera called for his entire cabinet to resign in response to protests over inequality and high living costs. More than a million people protested in the capital over the weekend – more than 5% of the country's population. Piñera had already ended the subway fare hike that sparked the protests and promised other reforms, including raising the minimum wage. It's not yet clear if his proposed cabinet shuffle will be enough to stop the protests.

Where people are keeping a close eye...

California. Wildfires there have forced more than 200,000 people to evacuate and burned tens of thousands of acres. Over the weekend, the governor declared a state of emergency in Sonoma and Los Angeles Counties. PG&E – the state's largest utility – has shut off power to more than 2 million people to try to avoid the spread of fires. That's because with dry weather and high wind speeds, power lines could spark fires that grow out of control this time of year.

Rep. Katie Hill (D-CA). Yesterday, she announced she was resigning amid an ethics investigation into an allegedly inappropriate sexual relationship she had with a staffer.

When you need a good laugh on Monday morning...