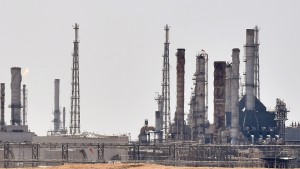 KING OF THE MARKET

Saudi Aramco. It’s kind of a big deal: The company produces 10% of the world’s oil supply. And brought in more profit last year than Apple and Alphabet…combined. Yesterday, Aramco announced plans to list the company on the Saudi stock exchange (called the Tadawul). It has yet to announce its share prices or what percentage of its shares will be listed. But the company is thought to be worth around $1.5 trillion.

Yup. This has been years in the making and is part of Saudi Crown Prince Mohammed bin Salman’s attempts to make the kingdom’s economy less dependent on oil. And is still taking place despite the attack back in September on its oil facilities. Some of the money from this IPO is expected to go toward investing in other industries. And getting more jobs for Saudis. Key, because unemployment there is over 10%.

That might be a harder sell. The country doesn’t have a great reputation for human rights – especially after last year’s killing of Jamal Khashoggi. But Saudi Arabia’s more or less bounced back from that. And then there’s the environment. Aramco is one of the biggest climate polluters in the world, though the company has reportedly said it supports the Paris climate deal and is trying to cut its carbon footprint. It’s unclear how all that could affect its stock, but people may not be eager to jump on the Aramco bandwagon.

This could be the world’s largest IPO in history. While there are ethical concerns about investing into a company like Aramco, it’s seen as an opportunity for the Saudi government to expand its economic portfolio beyond oil. But also for the Saudi people to finally be able to invest in a key natural resource, and for investors to look into the financial books of the world’s most profitable company.

Which state is making history…

Oklahoma. Back in 2016, voters there approved of downgrading some non-violent drug and property crimes from felonies to misdemeanors. And lawmakers decided to apply that retroactively. Fast forward to last week, when a state panel agreed to commute hundreds of inmates’ sentences. And today, they’re expected to be released in what officials are calling the largest single-day commutation in US history. It’s seen as a win for criminal justice reform, as Oklahoma has the country’s highest incarceration rate. And the move is expected to save the state almost $12 million.

What’s being told to pause…

The Trump admin. A federal judge has temporarily blocked a policy requiring immigrants to prove they have health insurance or can pay medical costs in order to get a visa. The White House said the rule would prevent an economic strain on the health care system. But critics say it effectively deters low-income immigrants from coming to the US. Now, a judge is saying ‘hold, please.’ The block stopped the policy from taking effect yesterday, and will stay in place for at least the next few weeks.

Air pollution. Dozens of flights to Delhi, India have been rerouted because of low visibility due to air pollution. Levels there reached more than 30 times higher than what’s considered safe and the gov declared a public health emergency. The increased levels come after many have been using fireworks for the Hindu festival Diwali and as farmers have been lighting fires to clear land. It’s not just affecting flights though – schools are closed until tomorrow.

Who’s getting the boot…

McDonald’s CEO. Over the weekend, the company announced it fired Steve Easterbrook – who had been CEO since 2015. The reason: he had a consensual relationship with an employee, which violated company policy. Easterbrook says he agrees with the board’s decision to fire him. The president of McDonald’s USA will be taking his place.

While the NYC Marathon winners crushed the race…

Former Texas congressman Beto O’Rourke is tapping out of the 2020 race. But here’s who’s still in it to win it.