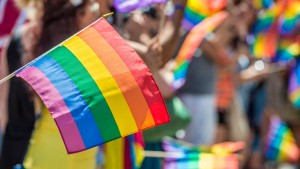 A new report shows that LGBTQ+ diversity on TV is at an all-time high.

Is there a catch?

Nope. Just some genuinely good news on a Friday. Last year, the advocacy group GLAAD called on the TV industry to do better when incorporating LGBTQ+ diversity. And called for 10% representation on screen by 2020. Yesterday, it released a report saying the industry delivered with 10.2%.

Not at all. The study also shows that LGBTQ+ women characters outnumbered LGBTQ+ men on broadcast TV for the first time ever. And, this is the second year in a row that LGBTQ+ people of color outnumbered those who are white. Latinx set their own record high for representation. There was also an increase in the number of transgender characters. But GLAAD doesn't want to stop there.

It's challenging the TV world to get to 20% by 2025. And that within the next two years, all platforms should make sure at least half of the LGBTQ+ characters in shows are people of color. In the meantime, the study credited shows like "Pose," which features the biggest LGBTQ+ cast ever for a scripted show – and "Batwoman," which features the first gay superhero in a lead TV role.

More than 11 million adults identify as LGBTQ+ in the US. And having this type of diversity on TV highlights the inclusivity that people have been asking for for decades.

The Trump admin. Earlier this week, it sued pharma company Gilead Sciences over alleged patent infringement. Gilead reportedly sells the only two HIV-prevention meds on the market, which can cost around $20,000 a year. The Trump admin's accusing the company of using gov patents to sell the meds without its permission. It also says the company's profiting off of taxpayer-funded research. Gilead has dismissed the gov's patent claims as "invalid."

...Oh and in related news, scientists have found a new strain of HIV for the first time in nearly 20 years. They say this discovery could help prevent new pandemics.

Skimm This: Our latest podcast ep explains the legal battle between the Trump admin and Gilead.

What's getting pulled from the shelves…

Juul's mint-flavored products. Yesterday, the e-cig giant said it'll stop selling them. It's the company's most popular flavor, and accounts for about 70% of its sales in the US. This comes amid more than 2,000 cases of vaping-related lung illnesses and 39 deaths.

Chicken. More than 2 million pounds of it, to be exact. They've been recalled in eight states because of potential contamination of things like metal. What the cluck

Former NYC Mayor Michael Bloomberg. While he's still thinking things over, former Attorney General Jeff Sessions is throwing his hat in the ring for his old US Senate seat in Alabama

When it turns into sweater weather…

Was it around February?