Daily Skimm: Rohingya Muslims, School Shooting in California, and the Return of the Razr 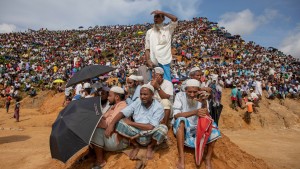 Rohingya Muslims have their first shot at justice in years.

The Rohingya have lived in mostly-Buddhist Myanmar for decades. But Myanmar sees them as illegal immigrants from neighboring Bangladesh. For years, it's denied them citizenship and basic rights like freedom of movement and access to education. All of this escalated in the summer of 2017.

A Rohingya insurgent group carried out an attack on Myanmar security forces, which killed a dozen officers. Myanmar's military responded by burning villages, raping women and children, and killing thousands of people. More than 700,000 Rohingya fled to Bangladesh. The UN has described the violence as ethnic cleansing and possible genocide.

Yesterday, the International Criminal Court greenlighted an investigation into possible crimes against humanity. It opens the door to the potential arrest and prosecution of dozens of people – including high-ranking officials. And comes days after Gambia filed a lawsuit against Myanmar at the International Court of Justice on behalf of dozens of countries, accusing it of genocide against the Rohingya.

Myanmar doesn't recognize the ICC's jurisdiction and has refused to cooperate, claiming its actions were justified. But the ICC is moving forward with it anyway, potentially challenging the limits of its jurisdiction. And with support from other states, the court may be able to bring some of these people to justice – providing hope to victims for the first time in years.

Santa Clarita. Yesterday, a shooting at Saugus High School in Santa Clarita, California, left two people dead and three others injured. The suspect – a student – turned the gun on himself and was taken to the hospital. Authorities have not yet found a motive for the shooting.

What people will be tuning into today…

The next impeachment inquiry hearing. On the docket: Marie Yovanovitch, former US ambassador to Ukraine at 9am ET. Yovanovitch was recalled from her position in May after what's been described as a smear campaign against her by President Trump's allies – including his personal lawyer Rudy Giuliani. But Giuliani has argued that her removal was due to her disloyalty to the president. Her testimony is expected to be a bit more fiery than what went down in the hearing on Wednesday. For a reminder of how we got to this point in the impeachment inquiry, we Skimm'd it for you.

Deval Patrick. Yesterday, the former Massachusetts governor joined the Democratic race for president. Patrick has close ties to former President Barack Obama and is expected to challenge former VP Joe Biden as a moderate. His announcement comes less than three months before the Iowa caucuses – which kick off voting in the primary season. Start your political engines.

Why you're seeing #IStandWithTaylor trending…

A social media post. In it, Taylor Swift claims two music execs are blocking her from using her old songs in her upcoming AMAs performance. Now she's telling them 'you need to calm down' and that she just wants to be able to perform her own music.

What's coming back, back again…