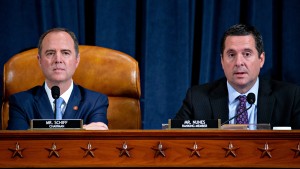 Read all about it: The 300-page impeachment inquiry report is now public.

That's a lot of pages.

That's why we're here. Reminder: This all started over a July phone call between President Trump and Ukraine's president. Trump seemed to urge Ukraine to investigate former VP Joe Biden and his son for corruption – all while withholding nearly $400 million in aid. Cue a whistleblower wondering out loud whether this violated any laws. And a weeks-long investigation (think: hearings) by the Democratic-led House Intelligence Committee. Yesterday, it released a report on its findings.

That Trump abused his power as president, and that evidence of his misconduct was "overwhelming." That he'd sought election interference from a foreign government, both personally and through proxies. And that this compromised national security. The report also accuses Trump of obstructing Congress's impeachment inquiry by doing things like not handing over requested documents and seeming to direct potential witnesses not to cooperate.

Did we learn anything new?

Yes. Turns out, the Dems had call records. They're saying the calls seem to indicate that a pressure campaign on Ukraine started as early as April.

And Republicans on the committee are saying...?

That they're not seeing any impeachable offenses here. And that this investigation is basically an "obsession with re-litigating the results" of the 2016 election.

The Trump admin still claims this has "utterly failed to produce any evidence of wrongdoing" by the president. But the report marks the end of the first phase of the impeachment inquiry, and moves House Dems one step closer to possibly impeaching Trump.

Skimm More: Confused by the impeachment process? We have a step-by-step guide.

What's counting down to Christmas...

North Korea. Yesterday, its state media warned the US of a possible "Christmas gift" if it doesn't meet an end-of-year deadline. The two countries have been trying to figure out a deal in which the US would offer concessions on sanctions and North Korea would end its nuclear weapons program. But talks have hit a stalemate since October. And North Korea is accusing the Trump admin of dragging its feet and stringing North Korea along to score a foreign policy win for the 2020 race. Now, North Korea's saying 'clock's ticking.' But President Trump doesn't seem to be worried. And says he has confidence North Korea will denuclearize.

Who's packing up their desks...

Google's co-founders. Yesterday, Larry Page and Sergey Brin said they were stepping down from their respective positions as CEO and president of Google's parent company, Alphabet. They say the time has come to let the company 'run free my child.' But some reportedly see the move as abandoning ship amid extra scrutiny (see: an antitrust investigation, employee walkouts). It also means a fancy new title for Google CEO Sundar Pichai.

Sen. Kamala Harris (D-CA). Yesterday, the once-leading Democratic candidate dropped out of the 2020 race for president. Harris said her campaign doesn't have the funds to keep going. Her departure also comes after months of low polling numbers and staff shake-ups.

Skimm More: We broke down who's still in the running for 2020.

What's making news out of NATO…

This video. It appears to show a few world leaders engaged in gossip.

Who's closing out the decade on a high note…

Drake. He won the top spot as Spotify's most-streamed artist of the decade – showcasing he's more than an '8 Out Of 10.'

When you're afraid of black widows...

Marvel at them instead.