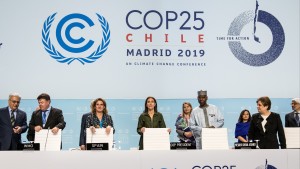 What's this summit about?

It's intended to address climate concerns and happens every year. But this year, the 12-day summit got a two-day extension to become the longest meeting in 25 years of talks. Even with those extra 48 hours, countries remained divided on how to tackle climate change.

What couldn't they agree on?

Carbon emissions, basically. The Earth's temperature is rising, in part due to more emissions (think: from cars, planes). One of the main goals of the summit was to find ways to regulate the carbon market (read: put a price on carbon dioxide emissions). But delegates weren't able to agree on the terms as major polluters (hi, China, the US, and Brazil) blocked stronger action. And punted a decision on it until next year. It wasn't the only decision that got punted.

Another issue that wasn't resolved: how to tackle damage when climate disasters strike. One proposal could have gotten big polluters to pay developing countries who haven't contributed as much to climate change. UN Secretary-General António Guterres said that the community "lost an important opportunity" to tackle the climate crisis. And that he's "more determined than ever" to address these issues at next year's summit.

This year's summit ended without significant progress on climate change, an issue that's widely expected to lead to more intense storms, droughts, and a refugee crisis...among other issues.

Which countries pretty much did a holiday gift exchange...

The US and China. Last week, they agreed to "phase one" of a trade deal after more than a year of negotiations. Under the agreement, the US hit the brakes on new tariffs set to go into effect yesterday. And cut the tariff rate on some tech goods by nearly 50%. In return, China agreed to buy billions of dollars' worth of agricultural goods, as well as to some protections for US intellectual property. President Trump called the deal "phenomenal." But the details aren't out. And critics are wondering if China will keep its word on those US farm product orders.

Where there could be a voter purge…

Wisconsin. Last week, a judge ruled that more than 200,000 voters could be dropped from the state's list of registered voters. Back in October, the state elections commission sent a letter to voters who were thought to have moved, asking them to update their registration info. Those who didn't would be removed from the voter rolls in 2021. But a conservative group filed a lawsuit, arguing that by law these voters should only have 30 days to respond. A judge agreed. Now, over 200,000 people face being purged from Wisconsin's voter rolls.

The Hallmark Channel. Last week, it removed Zola ads featuring a same-sex couple. That's because a conservative group had complained the wedding site ads were ruining the "family friendly" channel. But critics wanted inclusivity. And called for a boycott on the channel at the peak of the holiday season. Now, Hallmark is saying 'oops, never mind' and that it will run the ads.

Joe Burrow. Over the weekend, the LSU quarterback won the Heisman Trophy – an award given to the most outstanding player in college football. He's only the second player in LSU history to win it. And is projected to be the No. 1 draft pick in the NFL next year.

What'll make you say 'thanks, but no thanks'...