Daily Skimm: Boeing's Ex-CEO, an App Used as a Spy Tool, and Toys R For 50 Cent 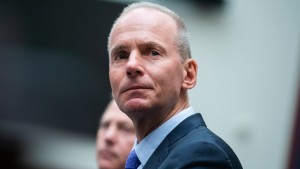 Boeing just showed its CEO out.

Yesterday, after months of crises and more bad news last week, Boeing's board said that "a change in leadership was necessary" to boost confidence for customers and regulators. And that CEO Dennis Muilenburg had been fired.

You said months of crises?

That's right. Boeing has been under investigation since two of its 737 Max planes crashed, killing 346 people. Investigators found a malfunction in the automated system designed to prevent the plane from stalling. Since then, other issues came to light – like inadequate pilot training and maintenance lapses. All 737 Max planes have been grounded since March. And just last week, Boeing announced it will temporarily halt production of the plane. But it doesn't stop there.

Since the 737 Max issues, Boeing has lost over $9 billion. And the aerospace giant's relationship with the FAA has taken a hit, after allegations it pressured regulators to clear the 737 Max planes to fly again – something the FAA refused to do. Over the weekend, Boeing suffered yet another setback when its unmanned spacecraft failed a mission that included bringing presents to astronauts at the International Space Station.

So who's taking over now?

Boeing's CFO for the next few weeks, then the company's chairman. Some welcomed the change in leadership, saying it was long overdue. Others – including some families of victims in the crashes – say it didn't go far enough, and want a total overhaul of the board.

Boeing is hoping this announcement will assuage the public it's taking steps to do better. But after months of problems, it's unclear that this move will be enough to convince regulators and consumers that profit no longer takes priority over safety.

What's apparently saying 'I spy with my little eye'...

ToTok. No, we didn't say TikTok – ToTok is a messaging app that's recently gained popularity. Problem, since US officials claim the UAE is using it to track users' conversations and movements. Although it was only introduced a couple of months ago, ToTok has been downloaded by millions of people (including those in the US) as an alternative to WhatsApp and Skype – which the UAE partially blocks. Both Google and Apple have removed the app from their stores.

...Oh and back to TikTok, the US Navy told military personnel and staff the Chinese-owned video app is not 'For You.' It doesn't want the app on gov-issued devices because of cybersecurity concerns.

Sgt 1st Class Michael J Goble. Yesterday, the US soldier was killed in Afghanistan – the 20th US service member to be killed there this year. The Defense Department said Goble was killed in combat, with the Taliban claiming to have killed him in a roadside bombing. Goble's death adds to the more than 2,400 Americans who've been killed in the 18 years of war there. And comes after President Trump had announced a restart in talks with the Taliban.

Where the holidays will feel different...

Notre Dame. The Paris cathedral will not hold Christmas services for the first time in over 200 years. That's because it's still in repairs after a fire in April destroyed the roof and spire. It's a major change, since Notre Dame has held a Christmas Mass every year since 1803, after the French Revolution – even during both world wars. The Mass this year will take place at a church near the Louvre.

Who's not a window shopper...