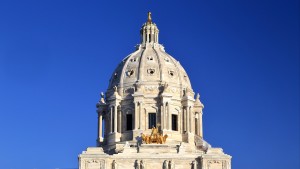 Minnesota is being sued.

The Republican Party's primary ballot only lists President Trump as a candidate. Let's back up: in March, Minnesota's holding its first presidential primary since 1992. A state law there allows political party chairs to decide who appears on the primary ballots. In this case, Minnesota's GOP opted to keep Trump on the ballot...but not the other two Republican candidates (former congressman Joe Walsh and former Massachusetts Governor Bill Weld).

As we said, yes. But the petitioners see this as "authoritarian" behavior, saying the party's picking the Republican candidate instead of leaving it up to voters. The state's GOP chairwoman defended the move, saying her job as party leader is to help re-elect the president.

The case heads to the Minnesota Supreme Court on Jan 9. But some worry this won't allow enough time to change the ballots before early voting starts on Jan 17. Party officials say Minnesotans can still write-in their preferred candidates.

And this is just a Minnesota thing?

This isn't the first time that states have favored a political candidate over another in primary elections. Several states canceled primaries and caucuses during re-election years in 1996, 2004, and 2012. Voters may or may not have been happy about it at the time...they aren't happy about it now.

This flight crash in Kazakhstan. This morning, a Bek Air flight crashed near Almaty International Airport, shortly after takeoff. 98 people were on board, and though at least 12 people died – dozens are believed to have survived. It's unclear what caused the crash – authorities are investigating.

Who's saying he'll be more careful next time...

Michael Bloomberg. Earlier this week, a report came out alleging that the former NYC mayor and current 2020 Democratic candidate used prison workers to make phone calls for his presidential campaign. Bloomberg confirmed the report as accurate, but said his campaign didn't know at the time that prisoners were involved. Apparently, Bloomberg's call-center vendor hired a subcontractor, which then hired a company that operates in part from Oklahoma prisons. Bloomberg said he cut ties with the companies involved. And that his campaign will make sure vendors "more properly vet their subcontractors." This is the latest scandal to hit the Bloomberg campaign, after crude comments he had allegedly made about women resurfaced last month.

Skimm More: Catch up on all the 2020 candidates here.

Japan. Earlier this week, the country's health ministry said Japan's population has declined by at least half a million people in just one year. There are two key reasons for the decline: one, a large older population that is dying. And two, the already low birth rate there is falling even lower. This year, fewer than 900,000 babies were born, the lowest number ever recorded. One potential reason for this: women are increasingly having to choose between their careers...and the cultural burden to handle not only child care but housework.

Psst...here's how low birth rates could affect your wallet.

The Nasdaq. Yesterday, the tech-heavy index finished above 9,000 points for the first time ever. This puts 2019 on track for the index's best year since 2013. It can send thank you notes in part to Amazon. The online retailer jumped over 4% after the holiday shopping season set a record. Other indexes – like the Dow Jones and the S&P 500 – also hit record highs.

...Oh and speaking of records, UPS is expecting a record number of returns. Santa tries, ok?