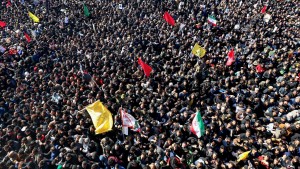 Iran struck back at the United States.

Over the death of its commander?

Yes. Last week, President Trump ordered an attack in Baghdad that killed Iran’s top general Qasem Soleimani, among others. The White House says Soleimani – responsible for the deaths of hundreds of Americans – had been plotting “imminent and sinister attacks” on US diplomats and military personnel. But Soleimani was revered in Iran, and the country promised “harsh retaliation” for his death. Yesterday, amid mourning and a deadly stampede, it delivered its response.

More than a dozen ballistic missiles targeting two Iraqi bases housing US troops. The first was the Asad air base in western Iraq – which houses about 1,500 US military members and coalition forces. Also targeted: the Erbil air base in northern Iraq, where the US launched the mission last year that killed ISIS’s leader. So far, no American casualties have been reported. And Iraq says none of its troops were killed.

Does this mean war?

No…at least not yet. Trump said “all is well” given the lack of casualties so far – and will make a formal statement later this morning. And although Iran has threatened to take this fight to US allies like Israel and the UAE, Iran’s foreign minister made clear last night that no further attacks were scheduled and that the country does “not seek escalation.”

When the US killed the second most powerful person in Iran, the country promised retaliation. Now, it says it’s “concluded” its response. With both countries implying they don’t want to escalate any further, this moment could mark a turn away from war…or another blundering step toward it.

What else Iran has on the mind…

This deadly plane crash. Yesterday, a plane bound for Ukraine crashed in Iran shortly after takeoff, killing all 176 people on board. Officials believe technical issues may have caused this, and say an investigation is underway. As of right now, the tragedy doesn’t seem to be connected to US-Iranian tensions.

Australia. Wildfires there – started back in September – have now killed at least 25 people. Thousands of homes and millions of acres have been destroyed. And wildlife has been hit especially hard. Some estimate that a billion animals or more have been killed – including birds, reptiles, mammals, and thousands of koalas.

PS: Here’s how you can help with relief efforts.

What’s taking ctrl of the situation…

Sonos. Yesterday, the speaker company sued Google, claiming it stole patented tech. Sonos says that when the two worked together in 2013 to incorporate Google’s streaming music service into Sonos speakers, Google snatched the tech that lets wireless speakers sync and play in different rooms. Google disputes the claims. And says it’s “disappointed” Sonos turned to a lawsuit over negotiating.

Facebook. Earlier this week, it confirmed that it will remove deepfakes (highly manipulated videos) from its platform. This is its latest attempt to curb the spread of misinformation before the 2020 election. But the policy wouldn’t ban videos manipulated for parody or satirical purposes…and critics aren’t a fan of the loopholes.

Researchers at Cornell University. They reportedly warn that some CBD pet health products contain virtually no CBD. At least, not enough to have any therapeutic effects for pets. The FDA is still trying to figure out regulations around marketing CBD products, for pets and people. And although there’s one FDA-approved CBD drug for kids, the agency hasn’t confirmed any benefits in veterinary medicine.

Skimm More: Have questions about CBD? We have a guide for that.

What’s got the Girl Scouts singing ‘Level Up’…