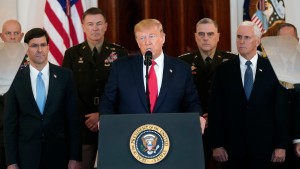 Tensions between Iran and the US may be easing up.

That Iran "appears to be standing down." And that the US will respond with "punishing" economic sanctions until Iran changes its behavior in the region (think: sponsoring terrorism, enriching uranium). Trump didn't, however, suggest any further military action.

So he's turning down the heat?

Seems like it. But Trump also made clear that he wants Iran to "never be allowed to have a nuclear weapon." And pushed for other countries to help him negotiate a new version of the Iran nuclear deal the US pulled out of. Key timing, since Iran announced earlier this week it would no longer abide by its commitments under that deal, potentially bringing it within months of developing nuclear weapons.

Do we know Iran's next move?

No. But earlier this week, the supreme leader said that military action – including the strikes it sent this week – is "not enough." And that the country seeks to end the US presence in the Middle East entirely. Still, Iran has made no indication of any future attacks, with the foreign minister saying Iran had "concluded" its response to Soleimani's death.

So all is well?

That's what Trump said. But even if both the US and Iran dial it down, there's the threat that Iranian proxy groups in the region – like Hezbollah in Lebanon or Shiite militias in Iraq – could carry out rogue attacks against the US or its allies, bringing tensions back up.

The US stunned the world when it killed the second most powerful person from Iran – a man who's overseen the rise of its vast proxy and terror network in Lebanon, Syria, Iraq, and beyond. But with Iran's retaliation leaving no American casualties, Trump seems ready to count this moment as a victory. And to return US-Iran tensions to their previous temperature: slightly below boiling.

Who just made everyone drop their teacups...

Prince Harry and Meghan Markle. Yesterday, the Duke and Duchess of Sussex announced they were stepping down as "senior" members of the royal family. And would start splitting their time between the UK and North America, where Markle is from. They said they'll continue to honor their duty to the queen, but will focus on launching their charity and carving a "progressive new role" within the monarchy. They also said they'll work to become "financially independent" from the rest of the royal family. It may not be difficult: together, their personal fortune is reportedly already at $30 million.

Where people are still in the dark…

Puerto Rico. Earlier this week, a deadly 6.4-magnitude earthquake hit the US territory, leaving about two-thirds of the population without power. Fearing aftershocks, many are sleeping outside to avoid building collapses. President Trump has approved funding to provide equipment and resources for the island, which is still recovering from Hurricane Maria in 2017.

What experienced a drop…

Cancer deaths. Yesterday, the American Cancer Society said rates have been steadily dropping since the '90s. The latest: they fell 2.2% from 2016 to 2017 – the largest single-year drop ever reported. This is largely due to the decline of lung cancer deaths. Doctors say this success is due to fewer people smoking and advances in treatment.

Who's facing a health battle…

Justin Bieber. Yesterday, the singer revealed he has been diagnosed with Lyme disease – a tick-borne illness that affects about 300,000 Americans each year. Bieber said he would share more in an upcoming docuseries, and that he'd be back "better than ever."

What's the host-less with the mostess…