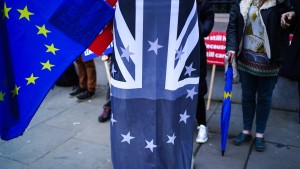 EU CAN GO EUR OWN WAY

The UK is one step closer to saying 'bye, bye, bye' to the EU.

I've heard that before.

For real this time. Reminder: The UK voted to leave the EU in a 2016 referendum. But nearly four years later, that breakup still hasn't happened. The UK has been in a political deadlock since the referendum, and most lawmakers have repeatedly given the thumbs down on terms of the divorce deal. But yesterday, the House of Commons voted largely in favor of the EU Withdrawal Agreement Bill, giving PM Boris Johnson a win.

So what's in the deal?

It talks about how much the UK will owe the EU in the divorce (hint: tens of billions of dollars). And addresses EU citizens' rights post-Brexit. The deal also lays out a plan on new customs arrangements at the Irish border – which has been a point of contention. Now, the UK is on track to leave on January 31.

And the divorce is final?

Not quite. The bill heads to the House of Lords – Parliament's upper chamber – where it's expected to pass. After that, it apparently goes over to Queen Elizabeth II for her to sign it into law.

Ok, then it's final?

Like we learned in "Marriage Story," separations are complicated. Part of the deal approved yesterday outlines an 11-month transition period for the UK and the EU – when lawmakers will sort out new agreements on anything from trade, security, transportation, and even fishing. But the EU says that wrapping up all these agreements by Johnson's year-end timeline is unrealistic. And that they could face another "no-deal" Brexit at the start of 2021.

After more than three years of failed attempts, it appears the UK has made a significant step toward Brexit. And while this seems like a big leap, the country still faces a number of major hurdles to be able to function independently from the alliance.

PS: Just like Harry and Meghan, the impacts of Brexit are headed to North America. Here's what the UK-EU divorce could mean for your wallet.

PPS: This afternoon, we're dropping an audio special on everything you need to know about what's going down with the royals. Subscribe to "Skimm This" to hear it.

The Trump admin. Yesterday, it proposed reducing federal regulations around the decades-old National Environmental Policy Act. The law required major federal projects (like bridges, highways, pipelines or power plants) to be reviewed and assessed if they impact the environment. But the oil and gas industry – including trade unions – have long called for changes to the regulations. Now, the admin's new rules would speed up the approval process and shorten the list of projects that require reviews, basically reducing federal oversight on these massive projects. There's a 60-day comment period before the rule is official.

The House. Yesterday, it voted in favor of limiting President Trump's ability to carry out military action against Iran without congressional approval. The move came on the heels of heightened US-Iran tensions, after Trump ordered an airstrike killing Iranian commander Qasem Soleimani. The Trump admin maintains it had every right to target Soleimani, whom it said had been planning "imminent" attacks on Americans. But House Speaker Nancy Pelosi (D-CA) and others didn't want things with Iran to escalate any further – and are reasserting Congress's right to declare war.

This plane crash. The US and Canada say the Ukraine International Airlines jetliner that crashed this week in Tehran was likely downed by an Iranian missile. And that it could have happened accidentally, as a result of heightened US-Iran tensions. Iran denied responsibility. But until investigators review flight data from the plane's recovered black box, the details behind the crash remain unclear.

Facebook. Yesterday, it said that it's sticking to its policy on political ads (read: not banning them). It's not going to bother with fact-checking any of these ads for you. But it will let users choose which ads they do or don't want to see.

What's in Vegas but isn't staying in Vegas...

CES. The 53rd annual tech show ends today. But don't worry, it will leave us with many questionable gadgets to remember it by. Turns out, Segways weren't weird enough. Screens are cool...but can they fold? BB-8 has competition. CES is not like a regular tech show, it's a cool tech show. Oh, and by the way it's 2020 and cooking is canceled.