Daily Skimm: Protests in Iran, Taiwan's Elections, and A Whole Lot of Chicken 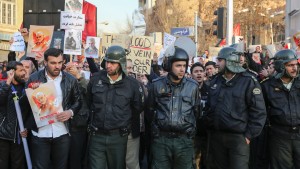 Thousands of Iranian protesters have been turning out, with some calling for their supreme leader to resign.

Over the weekend, Iran admitted to shooting down the Ukraine International Airlines jetliner that crashed last week, killing all 176 people on board. For a while, Iran insisted it had nothing to do with this – blaming a technical issue. But Canada, the US, and Ukraine suggested that an Iranian missile hit the plane. Now, after three days of issuing denials, Iran admitted responsibility.

That it made a "human error." Reminder: The crash happened amid heightened US-Iranian tensions following the US killing of top Iranian commander Qasem Soleimani...and the same night that Iran shot missiles at Iraqi bases housing US troops. Iran says it mistook the commercial plane for an "enemy target." Meanwhile, Ukraine has demanded that Iran punish those responsible. It wants compensation, and to receive the remains of the 11 Ukrainians killed in the crash. Canada – which lost 57 people – echoed a similar message.

And you said there've been protests in Iran?

Yes. Many in Iran are angry with their government over what they see as a cover-up. Thousands turned out across the country, with some chanting "death to liars." Others chanted, "they are lying that our enemy is America, our enemy is right here." Many called on members of the regime to resign, and covered their face to avoid detection by surveillance. Security forces have responded with tear gas and reportedly with live ammunition.

How is the US responding to all this?

President Trump tweeted his support for the protesters. And warned the Iranian regime not to kill them, something believed to have happened as recently as last year. Meanwhile, the US dealt with some mixed messaging of its own.

Trump had justified the airstrike against Soleimani by accusing him of planning "imminent" attacks on American diplomats and military personnel. Late last week, he said there'd been a threat to four embassies in particular. But yesterday, Defense Sec Mark Esper said he hadn't seen any evidence about that. And some Congress members have pushed back against what they say was inadequate evidence for the attack.

Last week, the US and Iran managed to avoid war. But when two countries come to the brink, and one kills 176 people in "error," this weekend's events show that they risk being held accountable – by the press, by political representatives, and by the public itself.

Who got to keep her job…

Taiwan's President Tsai Ing-wen. This weekend, she won reelection by a landslide. Reminder: the government of Taiwan was set up after World War II, when more than 1 million people escaped a civil war between Nationalists and Communists. Since then, Beijing and Taiwan have competed for recognition as China's rightful gov (current tally: Beijing is winning). Taiwan has since all but given up hope of getting control over the mainland, and in practice acts independently from China. Today, the island is led by President Tsai, whose party is calling for formal independence. Now, she's won reelection with over 57% of the vote.

Skimm More: We explain China's influence around the world here.

Two US service members. Over the weekend, the Taliban claimed responsibility for an explosion in Afghanistan that killed Staff Sgt Ian P McLaughlin and Private First Class Miguel A Villalon. Their deaths mark the first American casualties in the country this year, after 23 troops were killed last year – the deadliest for US service members there since 2014.

Storms in parts of the southern US and Midwest. Last week, severe storms in several states brought icy conditions, heavy rain, and tornadoes. At least 11 people have died. Tens of thousands of people are without power, and some highways have reportedly been closed due to flooding. The governor of Arkansas has declared a state of emergency.

What we're one step closer to...

Super Bowl LIV. We're down to four teams – two from the AFC, two from the NFC – that have a shot at making it. On the AFC side, that includes the Tennessee Titans, after an upset this weekend over the Baltimore Ravens...that especially upset QB Lamar Jackson. The Titans are facing off against the Kansas City Chiefs on Sunday for the AFC Championship, after QB Patrick Mahomes said 'you're welcome' for their second quarter comeback. On the NFC side, the San Francisco 49ers were a shoo-in...sorry to those Minnesota Vikings. On Sunday they'll face off against the Green Bay Packers, which knows how to Green Bay Pack in a tight all-around team (meet the Smiths, Davante Adams). May the conference championships be ever in your favor.