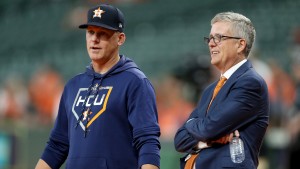 The Houston Astros seem to have struck out.

Yesterday, MLB announced that it was suspending Astros manager AJ Hinch and general manager Jeff Luhnow for the season. Shortly after, the Astros' owner said, 'actually they're fired.' This comes after a former Astros player accused the team of sign-stealing in 2017 leading up to their first-ever World Series win. And an investigation found the allegations were true.

Yep. In baseball, catchers use signals to tell the pitcher what kind of ball to throw (think: fastball, curveball). While players can use their eyes to steal signs for an advantage, they are banned from using electronic devices. MLB Commissioner Rob Manfred said the Astros broke the rules by using a camera in center field to capture signs from opposing catchers. The images were then displayed on a monitor near the dugout. When a sign (type of pitch) was decoded, Astros players would relay the info to the batter in code, by doing things like banging on a trash can.

What happens to the team now?

The players seem to have avoided a curveball – and aren't being disciplined. MLB said that practically every Astros player knew of the scheme and was in on it one way or another. But that it was ultimately the manager and general manager's responsibility to prevent this type of misconduct. Hinch and Luhnow accepted responsibility, but said they didn't endorse or know about the rule violations. The Astros will lose their first- and second-round draft picks this year and next. And will have to pay a record $5 million fine.

Nearly three years after their World Series high, the Houston Astros are now out of orbit, facing unprecedented punishment for cheating using technology. The case sets the precedent for potential future cheating scandals and leaves MLB to determine how to stop this from happening again.

The Pensacola shooting. Yesterday, Attorney General William Barr called last month's shooting an act of terrorism. In early December, a gunman opened fire at the Pensacola Naval Air Station in Florida, killing three sailors and injuring eight others. The shooter – killed by a sheriff's deputy – was identified as a Saudi aviation student who'd been serving on the Royal Saudi Air Force and was attending a training program in the US. Now, the DOJ is saying the gunman was motivated by Islamist ideology and that he had posted "anti-American, anti-Israeli, and jihadi messages" hours before the attack.

The US. Back in August, the US designated China as a currency manipulator for the first time since the '90s. It had accused China of allowing its currency to weaken to get an advantage in international markets (including during the US-China trade war). But yesterday, the Treasury Department said that China made "enforceable commitments to refrain from competitive devaluation." So the US took China off the list of currency manipulators it keeps handy.

Psst...the "Phase One" trade deal also addresses all those tariffs you've been hearing about. And US exports. Here's what it could mean for your wallet.

What's in the hot seat again…

The Oscars. Yesterday, the Academy released its full list of nominations. Surprise surprise, women were left out of the best director category for the second year in a row. The lack of diversity also has some on Twitter saying #OscarsSoWhite again.

Whose calendar is no longer overbooked...

Sen. Cory Booker (D-NJ). Yesterday, he dropped out of the Democratic primary race for president, citing a lack of funding.

Queen Elizabeth II. Yesterday, she said that she's "entirely supportive" of Prince Harry and Meghan Markle's desire to "create a new life as a young family." But she still would've preferred them to remain "full-time" working members of the royal family.

These Tigers. Yesterday, the LSU Tigers called themselves national champs after beating the Clemson Tigers 42-25, and finishing the season undefeated.