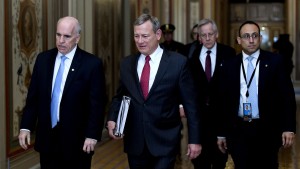 President Trump's impeachment trial is officially underway. But there are a lot of moving parts.

Last month, the House impeached Trump, charging him with abuse of power and obstruction of Congress over his dealings with Ukraine. That made him the third US president to be impeached. Earlier this week, the House sent the articles of impeachment to the Senate. Now, the trial can kick off. Well, kind of.

There's a process. Yesterday, House Intelligence Committee Chairman Adam Schiff (D-CA), the lead impeachment manager, read the articles of impeachment on the Senate floor. Then, Chief Justice John Roberts – who'll preside over the trial – swore in the senators to act as impartial jurors. On Tuesday, the senators are expected to debate and vote on a resolution to set the trial rules. Then comes opening arguments. But what's a trial without some last-minute developments, like...

A federal watchdog report…It says the Trump admin broke the law by freezing military aid to Ukraine. Reminder: Lawmakers accused Trump of abusing his power by pressuring Ukraine into announcing investigations, including one tied to former VP Joe Biden...all while withholding nearly $400 million in aid to Ukraine. Now, this report says the admin violated the law by delaying the aid for "policy reasons." There are no immediate repercussions. But Dems say this underscores their point – and want the Senate to subpoena more witnesses.

A Ukraine investigation...The country announced yesterday that it's looking into whether people tied to Trump illegally surveilled US Ambassador to Ukraine Marie Yovanovitch. This would have been while she was in Kyiv, before she was removed from her post last year and would later testify in the House impeachment investigation. The announcement comes after House Democrats released texts seeming to show a Trump ally tracking and discussing her location.

Another Ukraine investigation...The country's also looking into the alleged hacking of a Ukrainian gas company – Burisma. Sound familiar? It's the company Biden's son was on the board of, and the one Trump pushed Ukraine to open an investigation into. Turns out, Russia may have hacked the company in early November, while impeachment hearings were underway.

It is. Now add a former Trump associate's claims that the president "knew exactly what was going on" with the alleged pressure campaign on Ukraine. Trump maintains he didn't do anything wrong. And the White House says its actions were "consistent with the president's priorities and with the law."

These new developments could build up Democrats' arguments in Trump's impeachment trial. But as history has shown, not a single US president has been removed from office from a Senate trial. And with a Republican-majority Senate, it doesn't look like Trump will be either.

Where authorities are on high alert…

Virginia. Yesterday, the FBI arrested three suspected members of a white supremacist group possibly heading to a pro-gun rally in Richmond. They allegedly belong to "The Base," which authorities describe as a "racially motivated violent extremist group," and are facing firearms and immigration-related charges.

What's one step closer to being final…

The US-Mexico-Canada Agreement. Yesterday, the Senate voted to pass NAFTA's replacement. The deal gives stricter rules on auto part production, saying 75% must be made in North America. And at least 40% of auto production to be made by employees making at least $16 per hour and enhanced labor protections. It also grants the US more access to Canada's dairy market. Mexico has apparently applauded the deal for the boost it could give the country's economy. It still needs Canada's approval to take effect. In the meantime, the deal heads to President Trump for his signature.

Psst...Another day, another trade deal. Here's what the new NAFTA could mean for your wallet.

Microsoft. Yesterday, it announced it will cut its carbon emissions by more than half by 2030. And that it plans to create a special fund – $1 billion over four years – to speed up the creation of carbon removal tech.

...Oh and speaking of what's going on in the tech world, Google parent company Alphabet just hit the $1 trillion market cap. It's only the fourth US company to do so, joining Apple, Amazon, and Microsoft.

Who's getting in formation...

Women. This weekend marks the fourth annual Women's March, which started in Washington DC. In previous years, hundreds of thousands of people have joined to support things like reproductive and LGBTQ+ rights.

Skimm More: Our audio episode explains how the Women's March started and its impact on the country. Download theSkimm app to listen.