Daily Skimm: The Life of Kobe Bryant, Coronavirus, and the Space Force Logo 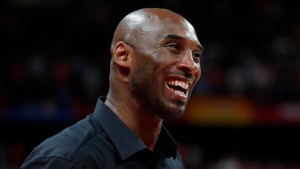 Basketball legend Kobe Bryant has died at the age of 41.

I still can't believe this.

It's hard to believe. Yesterday, Bryant, his 13-year-old daughter, Gianna, and seven others died in a helicopter crash in Calabasas, CA. His death has shocked the world, with celebrities and fans mourning one of the greatest players in NBA history.

Born in Philadelphia, Bryant began his 20-year professional basketball career right out of high school when he was drafted by the NBA and traded to the Los Angeles Lakers. He was the youngest player in NBA history in his opening game in 1996. During his career, he helped the Lakers win five NBA championships and won several MVP awards. He was an 18-time NBA All-Star. And won gold medals as a member of the US men's basketball team during the 2008 and 2012 Summer Olympics.

That's not all. In 2016, Bryant retired, but not before scoring 60 points in his final NBA game. He was the only NBA player in history to have both of his jerseys (No. 8 and No. 24) retired by a franchise, numbers that are iconic to NBA fans worldwide. Just over the weekend, Bryant congratulated LeBron James for passing him on the all-time NBA scoring list. Yesterday, James talked about meeting Bryant in 2002 and his admiration for the NBA legend.

What about off the court?

Bryant was the ambassador for After-School All-Stars, which organizes after-school programs for children. He also founded the Kobe Bryant China Fund, which raised money for education and health programs. But Bryant's success wasn't without controversy. In 2003, he was accused of sexual assault. The charges were dropped, and Bryant apologized for the incident. He said he believed it was consensual and later settled a civil suit. After he retired from the NBA, Bryant turned to the arts. He wrote children's books and produced animated stories. And in 2018, he won an Academy Award for his animated short "Dear Basketball." And he kept trying to build his legacy.

You mean the "Mamba mentality?"

Yes. Bryant called himself the "Black Mamba" and used the term "Mamba mentality" to remind everyone of the constant effort needed to be the best version of oneself. And he founded the Mamba Sports Academy, where he coached his daughter Gianna. Bryant leaves behind his wife Vanessa and three daughters Natalia, Bianka, and Capri – born in June.

Bryant is being remembered not only as one of the greatest basketball players of all time but also for his talents outside the court. His accomplishments have many mourning the man behind the "Mamba mentality." He will be missed.

This coronavirus. The pneumonia-like virus that was discovered last month in Wuhan, central China, has killed at least 81 people and infected more than 2,700 others. So far, the virus has spread to several other countries, including the US – where at least five cases have been reported (in California, Illinois, Washington state, and Arizona). Chinese President Xi Jinping has said that the country is facing a "grave situation" and the country extended the Lunar New Year holiday until Feb 2 to help curb the spread of the virus.

The Iowa caucuses. On Feb 3, the Iowa caucuses will put forth the first votes in the presidential primaries. And this year, Democrats are expected to record their vote on a new smartphone app. Supporters apparently say the mobile app would make it easier and faster to report results from some 1,700 caucus sites. But critics are concerned about the app's security (think: hackings). The state's Democratic Party chairman said the party is "confident in the security systems" that are in place, but some have reportedly called it a "security nightmare."

Skimm More: We Skimm'd everything you need to know about next week's Iowa caucuses.

What rolled out the red carpet…

The Grammys. Last night, they went down at the Staples Center in Los Angeles, home of the Los Angeles Lakers. Alicia Keys paid tribute to Kobe Bryant alongside Boyz II Men. Bryant was also included in a tribute to Nipsey Hussle. Billie Eilish got everything she wanted. The Grammys think Tyler is Creative. Demi Lovato is back. Lizzo and her flute won best pop solo performer. Period.

The US Space Force.

President Trump's impeachment trial is back on at 1pm ET. That's after the Senate worked over the weekend continuing with opening arguments from both sides. To recap: