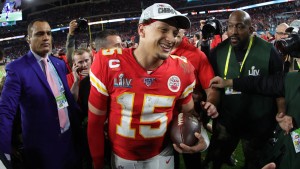 TAKE IT TO THE HOUSE, KID

Missouri. Last night, they played the San Francisco 49ers for a shot at the Vince Lombardi Trophy. Both teams brought the heat, but kept it pretty tame until a tie at halftime – only the fourth in Super Bowl history. By the third quarter, the Niners were in the lead. But the Chiefs came back fighting in the fourth, ending the night with an 11-point margin. Chiefs head coach Andy Reid got to hold his first Super Bowl trophy. And QB Patrick Mahomes became the youngest player to be named Super Bowl MVP. He's now headed to...Disney World.

What else will people be talking about?

Women delivered. Demi Lovato sang like a warrior. Offensive assistant coach Katie Sowers – the first female and openly gay coach in Super Bowl history – helped lead the 49ers to Hard Rock Stadium. It was their first time in the Super Bowl since losing to the Baltimore Ravens in 2013. And then there was the halftime show.

Muy caliente. Shakira played all the instruments. And started a new meme. JLo hustled. And her daughter showed off her vocals. The performers showed the world what two "Latin girls can do."

Ok, I'm ready to talk about the ads now.

Tom Brady still made an appearance. Google had us Googling where to buy tissues. Jason Momoa had us confused. Avocados had a moment. We all want to pet Scout. And go to space. Baby Nut is giving Baby Yoda some competition. And presidential candidates President Trump and former NYC mayor Michael Bloomberg both showed they have money.

It's been 50 years since the Chiefs last won the Super Bowl, in 1970. Now, they get bragging rights for 2020. And proved that what matters isn't how you start a game, it's how you end it.

Impeachment. Last week, the Senate voted nearly along party lines (51-49) to reject new witnesses and documents in the trial. Today, the trial will resume at 11am ET, and both sides (Trump's legal team and House Democrats) will present their closing arguments for up to four hours total.

The coronavirus outbreak. Yesterday, the first known coronavirus death outside of China was reported in the Philippines. The pneumonia-like virus has killed at least 360 people and infected more than 17,200 others since it was first reported in December. The US – which has at least 11 confirmed cases of the coronavirus – has now declared a public health emergency. And instituted a mandatory quarantine of up to two weeks on Americans who've recently been to Hubei – the Chinese province at the center of the outbreak. Foreign nationals who visited anywhere in China are barred entirely.

The travel ban. Last week, the Trump admin said it was expanding the number of countries facing travel restrictions from seven to 13. Immigrant visas will be suspended for citizens in Nigeria, Myanmar, Eritrea, and Kyrgyzstan. And people from Sudan and Tanzania will be barred from the US diversity visa program – which grants green cards to immigrants. The restrictions – which take effect later this month – won't apply to tourist, business or other nonimmigrant travel. The Trump admin says the six countries were reportedly unwilling or unable to follow "baseline" security criteria. But critics have pointed out that the majority of the six countries have a large Muslim population. And see this as the admin's latest attempt to ban Muslims from the US.

The Australian Open. Over the weekend, Sofia Kenin, a 21-year-old American, took home her first Grand Slam title. And Novak Djokovic reclaimed his No. 1 spot when he took home his eighth title in the men's singles – and paid tribute to the late Kobe Bryant.

Mark your calendars for a busy week. Here's what you'll want to keep tabs on…

Monday: Iowans are the first to make their picks for 2020 presidential nominees. The process starts tonight at 8pm ET – 7pm CT if you're in Iowa. Here's where to go. And read more below on the controversy.

Tuesday: President Trump is giving his annual State of the Union address. The focus may be more on trade accomplishments like the USMCA, less on impeachment.

Wednesday: Senators decide whether to convict or acquit President Trump of the charges against him: abuse of power and obstruction of Congress. It's a historic moment that will end the impeachment trial – and it's scheduled for 4pm ET.

Thursday: Your only free night of the work week. Make it count.

Friday: The Democratic presidential candidates will take the stage in New Hampshire for the eighth debate. Seven candidates have qualified, but others still have until 11:59pm ET the night before to get in the door.

Skimm More: Want to know when big events (like these) are coming up in the weeks ahead? theSkimm app lets you sync our calendar with yours. Download it now and start your free trial.