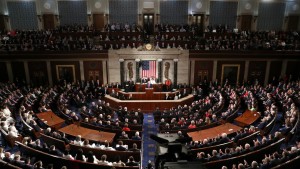 Last night, President Trump gave his annual State of the Union address, less than 24 hours before a historic day.

You're talking about impeachment, right?

Yup. The vote on whether to convict or acquit Trump goes down today at 4pm ET. It's one thing Trump did not bring up in the same House chamber where he was impeached almost two months ago. He did, however, get a chance to talk about:

Venezuela...as in the country with two presidents. Trump reminded everyone that dozens of countries oppose socialist leader Nicolás Maduro. He had the audience saying 'oh my Guaidó' when he brought in, you guessed it, opposition leader Juan Guaidó – and called him Venezuela's "true and legitimate" president. Trump also used the opportunity to make clear his position that "socialism destroys nations."

Trade...as in Trump said 'you're welcome' for scrapping NAFTA, the Clinton-era trade deal with Canada and Mexico. And replacing it with the USMCA – the first major trade deal to win support from US labor unions in decades. He also said 'new thing: we're friends with China now.'

Foreign policy...as in the US is making NATO countries pay up. Trump also talked up his Israeli-Palestinian peace plan. And the fact that the US killed ISIS's leader as well as top Iranian commander Qasem Soleimani. What didn't get mentioned: last year's Turkish invasion of northeastern Syria.

Thanks for that. And what about Amurrica?

He had plenty to say about the US of A, like…

The economy...as in Trump says it's doing great and wants you to know it. He's calling it a "blue-collar boom." Think: rising wages for low-income workers and low unemployment rates across the board. He also pointed out that under his admin, median household income reached a record high.

Health care…as in he doesn't like big medical bills either. And promises to protect people with pre-existing conditions, Medicare, and Social Security. Also, he said the US will eradicate the AIDS epidemic by 2030.

Immigration…as in Trump pointed the finger at undocumented immigrants for everything from crime to accessing taxpayer-funded health care. He said his admin brought border crossings down. And is still all-in on building the wall.

And how did Dems respond to all this?

With a lot of sitting...at least for the ones who were there. Many wore white. Some heckled. In her rebuttal, Gov. Gretchen Whitmer (D-MI) criticized Republicans on health care. And about Trump, she said that "no one should be above the law."

Any other big moments?

Rush Limbaugh got the Presidential Medal of Freedom. A military family was reunited. Space Force will live on. And House Speaker Nancy Pelosi's (D-CA) actions spoke louder than words.

Trump used his third SOTU to talk up his achievements and appeal to his base on issues like gun rights and abortion. He also used the opportunity to push Congress to do things like pass family leave for all parents and expand school choice. But to continue his "great American comeback," he needs the Senate to officially let him keep his job.

Where (some of) the results are in…

Iowa. Yesterday, the Iowa Democratic Party shared some results from the caucuses earlier this week. So far, former Mayor Pete Buttigieg is in the lead, with Sens. Bernie Sanders (I-VT) and Elizabeth Warren (D-MA) in second and third place. That could still change...because only 71% of precincts are reporting. Reminder: the Iowa caucuses are a pretty big deal because in recent decades, most Dem candidates who've won there have gone on to be the party's nominee. But the results came a day late due to "inconsistencies."

The tech biz. Yesterday, a report revealed that the US gov is hoping to get rid of Huawei's 5G technology. And that it will work with tech companies (hi Microsoft, Dell, and AT&T) to develop an alternative. Reminder: The US has blacklisted Huawei over concerns the Chinese company could use the tech to spy on people. Now, the gov plan would create common engineering standards so software developers can eventually run code for 5G without Huawei equipment. Officials say the changes could come within 18 months. But some critics are saying the move is 'too little, too late.'

The razor biz. Earlier this week, the Federal Trade Commission sued to block Edgewell Personal Care Co – Schick's parent company – from acquiring Harry's (a startup razor company). In recent years, direct-to-consumer brands like Harry's have forced companies like Edgewell to slash prices in order to compete. But the FTC wants to schtick it to the company, saying the merger would hurt competition. Harry's co-founders said they were "disappointed" by the lawsuit.

Psst...while tech companies race to get you faster internet, read up on what 5G could mean for your wallet.

What's got people singing 'all my exes live in Texas'…