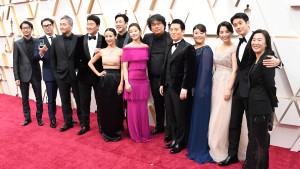 THINGS MAKING YOU WISH YOU STILL HAD CABLE

How'd that turn out?

Great for "Parasite," the first non-English language film to win the top prize. It also swept in other categories. Joaquin Phoenix and Renée Zellweger won the Meryl Streep awards. Brad Pitt also had his wish come true. And Laura Dern took home best supporting actress. She won it structurally, and she won it spiritually.

There were some Unappreciated Gems, including "Hustlers," "Us," "Uncut Gems," and female directors. Also, diversity. As in the lack of nominations for people of color had #OscarsSoWhite trending again. But there were some highlights: Taika Waititi dedicated his Oscar to "all the indigenous kids in the world." "Hair Love'' won best animated short and brought a guest. And again, "Parasite."

Hildur Guðnadóttir scored one for female composers. Maya Rudolph and Kristen Wiig impressed everyone but Billie Eilish. Adele Dazeem brought friends this time. And Eminem had another shot, another opportunity.

The Oscars are the biggest awards in show biz. And last night they made history. But the awards show still fueled concerns that women and minorities aren't getting their due in an industry rocked by movements like #OscarsSoWhite and #MeToo.

Speaking of events with less than stellar diversity, the eighth Democratic debate.

We got you. Last week, the seven top candidates took to the stage in New Hampshire, just days ahead of tomorrow's primaries. The stakes were high fresh off of the not-so-smooth Iowa caucuses. And the candidates took on the two who nearly tied there: former South Bend, IN Mayor Pete Buttigieg (D) and Sen. Bernie Sanders (I-VT). Among the main topics of the night were race and abortion rights.

What did they have to say?

Billionaire Tom Steyer supports reparations. Sen. Amy Klobuchar (D-MN) made clear she wants to address voter suppression. Sen. Elizabeth Warren (D-MA) called out Buttigieg for racial disparity in the criminal justice system under his watch. Entrepreneur Andrew Yang – the only person of color on stage – said "you can't regulate away racism" with a "patchwork of laws." On abortion, all of the candidates who weighed in agreed that it's a woman's right to choose. And most, like Sanders and former VP Joe Biden, said they'd codify Roe v. Wade.

The race to 2020 continues to pick up steam with the New Hampshire primaries tomorrow. After the Iowa caucuses' murky results, candidates used the eighth debate to stand strong on issues that could determine if they stay in or out of the race to the White House.

Skimm More: We explain everything you need to know about the New Hampshire primaries.

What sent out some team-wide emails…

The Trump admin. On Friday – days after his Senate acquittal – President Trump fired two people who'd testified during the impeachment probe. First was Lt. Col. Alexander Vindman, who testified about what he had heard on the July call between Trump and Ukraine's president. Hours later, Trump fired US Ambassador to the EU Gordon Sondland, who said he believed that US military aid was tied to Ukraine's president announcing investigations. And that "everyone was in the loop." But that's not all: Trump also fired Vindman's twin brother.

Thailand. Over the weekend, a soldier killed at least 29 people and injured dozens more at a military base and shopping mall in the country's northeast. It's Thailand's deadliest mass shooting in history. Authorities killed the gunman but still don't have a clear motive – although the shooting reportedly started after a property dispute. About one in 10 people legally own a gun in Thailand, a country reportedly with one of the highest number of gun-related deaths in Asia.

The coronavirus. Over the weekend, the death toll from the virus reached at least 910 with over 40,000 people infected. The global death toll has now surpassed the toll from the SARS epidemic in the early 2000s. And the first death of a US citizen was reported in Wuhan, China. Some reports say the number of coronavirus cases has slowed in recent days, but the World Health Organization said it's too early to let our guards down.

Where you can apparently get a BS in CBD...