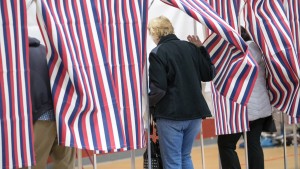 I assume you’re referring to the primaries?

Correct. Yesterday, the Granite State turned out for the first primaries of 2020 (hint: Iowa’s were caucuses). President Trump won on the GOP side. No shock there. Sen. Bernie Sanders (I-VT) won on the Dems’ side. Coming off of a near-tie in Iowa, the results indicate the Democratic Party may be rallying behind two front-runners: Sanders and former South Bend, IN Mayor Pete Buttigieg.

It’s so important to have clarity.

Thank you, Chris Harrison. But yes, Democratic voters needed something to hold onto after Iowa. Reminder: a coding error in the Iowa Democratic Party’s voting app last week left results up in the air for days. Sanders and Buttigieg – as well as the DNC chair – called for a partial recanvass. The confusion had Dems saying ‘Iowanna cry.’ Now, candidates who didn’t have a stellar showing in Iowa and NH are dropping out.

Who are we pouring one out for?

Entrepreneur Andrew Yang and moderate Sen. Michael Bennet (D-CO). Both dropped out of the Dem race yesterday: Yang, after finishing with just 1% of support in Iowa – and Bennet, after his own disappointing showing. But they left their marks. Yang in particular made a splash for his campaign centered on a universal basic income.

Here’s to the ones that we got.

Right – so let’s talk about them. Sen. Amy Klobuchar (D-MN) came in third yesterday and is doing a victory lap. Now, other candidates that had been polling higher (like Sen. Elizabeth Warren (D-MA) and former VP Joe Biden) have some explaining to do. Biden in particular seems to be banking on a strong showing in South Carolina, a more diverse state than Iowa or NH, and one where he’s been a clear favorite. Oh, and for what it’s worth GOP challenger Bill Weld can now claim a small victory of his own.

There’s a packed schedule of caucuses, primaries, and debates coming up where the remaining candidates can make their case. But the fact remains that only one person in the last 40 years has lost both Iowa and NH and gone on to be president: Bill Clinton.

Whose case is causing an uproar…

Roger Stone’s. Yesterday, the four prosecutors in his case quit. Reminder: In 2016, Stone – a longtime adviser to President Trump – pursued the release of damaging info on Hillary Clinton via WikiLeaks. He soon got caught up in special counsel Robert Mueller’s investigation, and was convicted last year for several crimes, including lying to Congress. The prosecution recommended up to nine years behind bars. But yesterday, Trump called this “ridiculous” and hours later, the Justice Dept recommended a more lenient sentence. Now some are wondering if the new sentence was due to political pressure from the White House. The DOJ maintains the decision to change the sentencing recommendation was made before Trump’s tweet and without consulting the White House.

T-Mobile and Sprint. Yesterday, a federal judge approved the planned merger of the two phone companies – the $26.5 billion deal agreed on nearly two years ago to allow T-Mobile to buy Sprint. But over a dozen state attorneys general had challenged the merger, claiming it would negatively affect competition and raise prices. Ultimately, the federal judge said combining the nation’s third- and fourth-largest wireless carriers to create a new telecom company wouldn’t “substantially lessen competition” when taking on AT&T and Verizon.

Psst…the Sprint/T-Mobile merger could mean changes for your phone bill. Even if you get your service from one of the other guys. Here’s how.

Where the mighty have fallen…

Sudan. Yesterday, the transitional government agreed to hand former President Omar al-Bashir over to the International Criminal Court (ICC). In the mid-2000s, Bashir’s government was accused of genocide in Darfur (western Sudan) leading to the deaths of an estimated 300,000 people. Last year, separate protests originally launched over economic concerns led to al-Bashir’s ouster…and a jolt of optimism for Darfuris seeking justice. Now, as part of an ongoing peace process with Darfuri rebels, the transitional government says it will hand over al-Bashir – among others wanted by the ICC – to face allegations of war crimes and genocide.

Australia. Yesterday, the country’s highest court ruled that indigenous Australians cannot be deported even if they do not hold Australian citizenship. The court determined they have a unique connection to Australia and therefore can never be regarded as foreigners.

Who’s in your news feed again…

Jussie Smollett. If you thought all charges against the actor were dropped, think again. He’s being indicted on six counts of disorderly conduct for making false reports to the Chicago police after claiming he was the victim of a hate crime last year. Smollett’s lawyer says the new charges raise “serious questions about the integrity of the investigation.”

What’s got the world in a furry…