Daily Skimm: Uighurs in China, Coronavirus, and More Wine for Your Buck 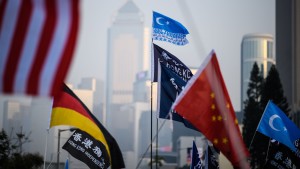 THINGS PUTTING CHINA IN THE SPOTLIGHT

Another leaked document is shedding more insight into China's treatment of a Muslim minority group.

For the past few years, hundreds of thousands of Uighurs and other Muslim minority groups have been placed into indoctrination camps, in what some have called the most sweeping mass detentions since the Mao era. Now, a 137-page leaked file shows the Chinese Communist Party (CCP) has been keeping close tabs on Uighur Muslims to find out who to arrest.

What does the document show?

The different categories the CCP has used to track and monitor the Uighurs. Religion is the biggest focus, with the party keeping note of criteria such as praying, going to a mosque, or growing a long beard. The party also focused on family ties, with those with detained relatives especially likely to end up in a camp. Detainees and their families have also been classified on whether they're considered "trustworthy," and graded on their attitude, behavior, and "heavy" religious environment.

This isn't the first time the world has been told about China's mass detention of the Muslim minority. And yet, with Beijing's efforts to control and repress information, we're still learning details of the campaign.

There are questions surrounding China and whether it tried to cover up the severity of the coronavirus.

Last month, Chinese President Xi Jinping first spoke publicly on the pneumonia-like virus, which has now infected 71,000 people and killed nearly 2,000. He called on authorities to continue their efforts to control the outbreak. The World Health Organization (WHO) later praised China for its "transparency." But over the weekend, an internal speech revealed that Xi knew about the virus almost two weeks before he commented on it publicly. This raised questions on whether the CCP tried to cover up the severity of the virus, allowing the virus to spread through China and the world.

Why would it do that?

Control. Much like the SARS outbreak in the early 2000s, the Chinese gov is being accused of trying to keep this latest outbreak under wraps to avoid showing weakness. Recently, the country detained an activist who criticized Xi's handling of the coronavirus. Weeks ago, the doctor who first alerted his colleagues of the coronavirus – but was silenced by police – died from the disease. And this morning, one of Wuhan's most senior doctors and the director of the Wuchang hospital in Wuhan died after contracting the coronavirus. Meanwhile, 14 Americans tested positive for the coronavirus after being evacuated from the Diamond Princess cruise ship.

While China has yet to respond to the coverup claims, the highly contagious coronavirus still has the world on high alert. And many are wondering if China could have done more to prevent the spread of the outbreak.

Who's keeping their legal team busy…

Boy Scouts of America (BSA). Earlier this morning, the 110-year-old nonprofit filed for bankruptcy as it faces hundreds of lawsuits from men who say they were sexually abused as scouts. Reminder: for decades, the BSA kept files about possible pedophiles. Last year, it was revealed that the nonprofit had kept a list that included more than 7,800 scout leaders known or suspected to have sexually abused boys since the 1940s. And it had identified more than 12,000 victims. Now, because of the bankruptcy filing, sexual abuse lawsuits and others will be put on hold as this makes its way through bankruptcy court.

Whose hot seat is getting hotter...

Attorney General William Barr's. Earlier this week, more than 2,000 former Justice Dept officials – who served under both Democratic and Republican admins – called on the AG to resign. Reminder: Last week, the DOJ recommended a more lenient sentence for Roger Stone – the president's longtime adviser – after Trump made clear he didn't approve of the prosecution's recommended seven- to nine-year sentencing. It sparked concerns that the White House may have pressured the DOJ, even though Barr said he wouldn't be "bullied or influenced" by anyone. Now, these 2,000 former DOJ officials claim that Barr did Trump's "personal bidding" and that it damaged the DOJ's "reputation for integrity and the rule of law."

Who may be closer to signing on the dotted line...

The US and the Taliban. Last week, Defense Sec Mark Esper said the two had agreed to a week-long "reduction in violence." And that a longer-term peace deal looked "promising." The US and the Taliban had been working on a deal last year, but President Trump canceled talks after a Taliban attack killed a US service member. Now, Esper says if the truce holds, the US could potentially reduce its military presence in Afghanistan, where it's been for 18 years. Some US officials said the truce could take place "very soon." And the Taliban seems to hope it can sign a peace deal by the end of the month.

Pier 1. Yesterday, the home furnishing retailer where you bought that one pillow said it filed for bankruptcy, and is in talks with potential buyers. Just last month, the company said it was closing more than 400 stores after several quarters of declining sales due to competition with online retailers like Amazon and Wayfair.

Where everyone went all out…

The NBA All-Star Game. Over the weekend, the league showed love and support for late basketball legend Kobe Bryant and his daughter, Gianna. From jerseys to the pregame and halftime performances, the NBA and its players made clear Bryant will be missed. Team LeBron beat Team Giannis, and Los Angeles Clippers forward Kawhi Leonard took home the first Kobe Bryant MVP Award.

What's having people say 'you had me at Merlot'...