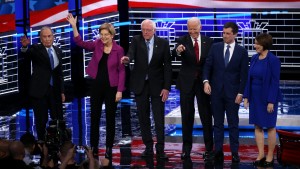 THE GLOVES ARE OFF

What happens in Vegas…can get feisty.

Last night was the ninth Democratic presidential debate. And it went down in Las Vegas, ahead of Nevada’s Democratic caucuses this weekend. With voting in two states down, the pressure was on all the candidates to prove themselves. And it showed with some tense face-offs.

All the things. Here’s what the candidates on stage had to answer for:

Former NYC Mayor Michael Bloomberg…the new guy on stage was first called out for his controversial stop-and-frisk policy that disproportionately targeted minorities. And for his comments on the LGBTQ+ community and women. He was pushed to release female employees from their NDAs. His response? Some of the women just “didn’t like the joke.” Also, he “can’t speak for all billionaires” but he wants you to know he’s too rich to file regular-people taxes.

Sen. Elizabeth Warren (D-MA)…the one who came out swinging. But mainly because what she has to answer for is a lack of traction with Iowa and New Hampshire voters.

Sen. Bernie Sanders (I-VT)…his Medicare-for-all funding. His brand of democratic socialism. And the recent behavior of his Bernie Bros. Something we get into more here.

Former South Bend, IN Mayor Pete Buttigieg…his big donors. And his ability to throw stones when he hasn’t been in the “arena.” But he pointed out that DC isn’t the only arena in town.

Sen. Amy Klobuchar (D-MN)…her voting record. And for missing the name of the president of Mexico in a Telemundo interview. Her response? People make mistakes. And that she has all the experience needed, thank you very much.

Former VP Joe Biden…very little. Serving as a reminder that he’s no longer the front-runner everyone feels the need to attack.

These six Democratic candidates are trying to make the case that they’re strong enough to take on President Trump in November. But last night, their main target was…each other.

Germany. Yesterday, a gunman killed at least nine people in Hanau, a town just outside of Frankfurt. Officials are treating it as a terror attack, saying that the suspect – who was found dead – may have had a far-right motive. Germany’s president reportedly condemned the “racist hatred” and said the country will “stand up for peaceful coexistence.”

What has a whole new outlook post-divorce…

The UK. Now that Brexit’s done, the UK gets to make its own rules. And yesterday, it unveiled new immigration rules, restricting work visas for low-skilled workers and those who can’t speak English. The gov says this will let the UK “take back” control of its borders and reduce migration. It also says it’ll make it easier for high-skilled workers (scientists, engineers, academics) to come from beyond the EU. But employers aren’t convinced. And worry this could lead to a staffing shortage – especially in the senior care industry. The rules are set to go into effect next year after the post-Brexit transition period ends in December.

What we can’t just blame on gassy cows…

Methane. A new study shows that methane emissions from fossil fuels could be 25-40% higher than previously thought. Methane can be released in many ways, from animals (see: cow burps), to geological sources (like mud volcanoes), to fossil fuels (like oil and gas production). In all cases it’s a problem, since methane can warm the planet 80 times as quickly as CO2. This study focused on the types of methane that are released by the earth, whether naturally or from human extraction. Scientists wanted to know whether humans are to blame for the uptick in those emissions since the 1700s. Spoiler alert: yes. And the oil and gas industry could be the main cause.

M.M.LaFleur. Earlier this week, the clothing company said it will lend free clothing to women running for public office “at any level.” From town council to Congress…to president. The ultimate goal: see more women win.

What you wish you could shake off…

This image of a moldy burger.