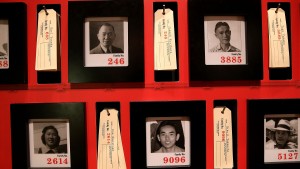 California is owning up to its treatment of Japanese Americans.

After the Japanese attack on Pearl Harbor in 1941, then-President Franklin D Roosevelt signed an executive order to evacuate and relocate anyone from the West Coast considered a national security threat. While that included some Italian and German immigrants, the executive order disproportionately targeted Japanese Americans. An estimated 120,000 people were sent to internment camps.

And what was California's role?

It complied...and held two of the ten camps, including the largest. The goal was apparently to defend the US from Japanese spies. But that's not all. State lawmakers at the time approved their own resolution questioning the loyalty of Japanese Americans. And called on the state's personnel board to fire state employees who "may be proved to be disloyal." Even prior to WWII, it passed a law making it illegal for Asian immigrants to own or lease land in the state.

Right. In 1988, then-President Ronald Reagan signed the Civil Liberties Act, apologizing on behalf of the country for the actions motivated by "racial prejudice, wartime hysteria, and a failure of political leadership." It also granted $20,000 in reparations to each Japanese American affected. Now, nearly 80 years since Roosevelt's executive order, California is acknowledging its own role in the abuses, and its failure to "support and defend" civil rights. Some have called the move overdue.

This isn't the first time California has taken ownership for its historical treatment of minorities (see: this and this). This time, it was reportedly inspired to do so because of recent policies like the Trump admin's travel ban on multiple Muslim-majority countries. And state lawmakers want to lead by example to "ensure that such an assault on freedom will never again happen to any community in the United States."

This briefing. Yesterday, it came out that intelligence officials briefed House lawmakers on Russian interference in the 2020 election. The briefing – which happened last week – warned of Russia's continued efforts (think: hacking, use of social media) to get President Trump re-elected. Trump apparently wasn't too happy about the news coming out and worried that Democrats would use this against him.

Who's trading in his top hat for an orange jumpsuit...

Roger Stone. Yesterday, President Trump's longtime adviser was sentenced to more than three years in prison for lying to Congress, obstruction, and witness tampering. Reminder: prosecutors at first recommended up to nine years. But Trump called their rec "horrible and very unfair" and hours later, the Justice Dept suggested a more lenient sentence. Cue: all four prosecutors quitting the case and outcry over what seemed like political pressure by the White House. Stone has requested a new trial, accusing one of the jurors of bias.

Victoria's Secret. The secret's out: yesterday, its parent company L Brands said it's selling a majority stake in the lingerie brand to a private equity firm after years of declining sales. The price tag: $525 million. L Brands CEO and chairman Leslie Wexner will be stepping down. It comes amid scrutiny over Wexner's ties to convicted sex offender Jeffrey Epstein.

Gap. The company most of your elementary school hoodies came from is partnering with resale company ThredUp. Shoppers can drop off used clothes in exchange for credits at Gap stores. Looks like it's the latest retailer (hi, Macy's, Nordstrom) to try to profit off your used clothes.

This performance. It's a woman playing the violin while she undergoes brain surgery for a tumor...all to ensure her musical abilities were not damaged.

Why your friend may have canceled dinner plans on Saturday…