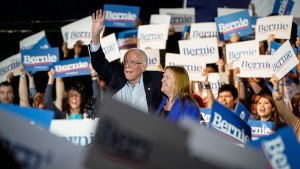 DING, DING, DING...WE HAVE A WINNER

At the Nevada Democratic caucuses?

Yup. Over the weekend, voters threw their chips in for their favorite Dem presidential candidate. The stakes were high considering Nevada's the first majority-minority state to vote. Less than 49% of the state is white, so this was the first chance for White House hopefuls to show how they appeal to a diverse group of voters. And on Saturday, caucusgoers were clearly Feeling the Bern: with 88% of precincts reporting, Sanders has a more-than-20-point lead over the next candidate, solidifying him as the party's front-runner.

How did everyone else do?

Former VP Joe Biden came in second, placing higher than in Iowa and New Hampshire. Former South Bend, IN Mayor Pete Buttigieg came in third place. But he questioned the results, citing "irregularities" with how the Nevada State Democratic Party incorporated early-voting data into its results. He called on the party to release the data but so far, the party isn't budging. And after a fiery performance at last week's Dem debate in Las Vegas, Sen. Elizabeth Warren (D-MA) rounded up the top four. Oh and on the Republican side, there was no competition since the Nevada GOP canceled its caucuses in a show of support for President Trump. But that's not all.

There's the whole Russia thing. We learned last week that the intelligence community thinks Russia is interfering in the 2020 election to support Trump's campaign. But on Friday, it came out that Russia is hedging its bets: and that Sanders had been briefed on Russian efforts to support his campaign, too. In response to reports, Sanders confirmed he'd been briefed and warned Russia to "stay out" of US elections. Now Trump's publicly suggesting that Dems launch an investigation into whether Russia helped Sanders win Nevada.

The Democratic presidential field now has a clear front-runner, but the primary election process is far from over. Next up: another night on the debate stage tomorrow. And the South Carolina Democratic primary this weekend – another diverse state where candidates are hoping to win over African-American voters.

Coronavirus. Over the weekend, Italy experienced the worst coronavirus outbreak in Europe with over 150 cases and at least four deaths. Italian officials canceled the Venice Carnival, closed some schools, and put tens of thousands of people on lockdown in an attempt to contain the virus. Meanwhile, South Korea raised its national threat level to "red alert" for the first time since the H1N1 swine flu outbreak in 2009. The threat level allows the gov to put affected cities on lockdown and restrict domestic travel. It comes as the country deals with its own coronavirus outbreak, with over 830 people infected and at least seven deaths. In Iran, at least 43 people are infected and at least 12 others have died in what's reportedly the largest fatality rate outside of China (where the virus was first discovered). Both Turkey and Pakistan have closed their borders with Iran to contain the threat. Meanwhile, China has postponed its annual meeting of parliament in Beijing due to the coronavirus outbreak.

Who got his passport stamped…

President Trump. Today, he made his first presidential visit to India, where he was greeted by tens of thousands of people. During his trip, Trump is expected to strengthen relations with Prime Minister Narendra Modi, and the two leaders could tackle trade tensions. While the two-day visit will be packed with political affairs (like a possible trade agreement), Trump is also expected to get a tour of the Taj Mahal.

B Smith. Over the weekend, the famed restaurateur, lifestyle guru, and author died at age 70 after a battle with Alzheimer's. Smith was one of the first African-American models to be featured on the cover of "Mademoiselle," and helped break down barriers for black women in the US. She wore many hats: she modeled, had a talk show, ran a couple of restaurants, and started her own line of home products. Her husband Dan Gasby said: "Heaven is shining even brighter now that it is graced with B's dazzling and unforgettable smile." RIP.

Who's also being remembered...

Kobe and Gianna Bryant. Today, the Staples Center – home of the Los Angeles Lakers – will honor the late basketball legend and his daughter. About 20,000 people are expected to fill the arena for "A Celebration of Life'' public memorial service in their honor. It takes place nearly a month after the Jan 26 helicopter crash that killed Bryant, his daughter, and seven others. The service is set to begin at 1pm ET today, on the symbolic day: 2/24.

What may(o) come in handy for your next picnic...