Daily Skimm: Tenth Democratic Debate, Hosni Mubarak, and Getting Giffy With It 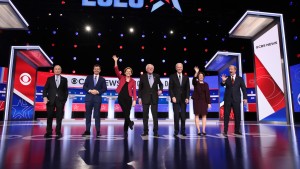 THE GLOVES ARE OFF PT. 2

The first rule of fight club is…

Yeah, yeah we know. In this case, seven candidates were in the ring last night for the 10th Democratic presidential debate (out of 12). Here were the big themes of the night…

First-degree Bern…as in, ever since Nevada, Sen. Bernie Sanders (I-VT) became the Democratic front-runner…and the other candidates aren’t loving it. Sanders took hits over his campaign apparently getting love from Russia, the math on Medicare for All, and his record with gun manufacturers. He also faced some questions for his support of socialism abroad (hey Cuba, Nicaragua). But wants you to know he rejects authoritarianism.

Claws out…as in the Warren Warpath continued. She hit Bloomberg on his prior support for Republican candidates including Sen. Lindsey Graham (R-SC). And for his alleged comments telling a pregnant employee to “kill” her baby…comments Bloomberg vehemently denied.

Foreign policy…as in Biden called for sanctions on Russia. Sanders called Israeli PM Benjamin Netanyahu a “racist.” Klobuchar and Biden said they’d negotiate with North Korea differently. And multiple candidates called out China over human rights abuses, as well as the Trump admin’s handling of the coronavirus that originated there. Some candidates called for more funding to agencies like the CDC and NIH.

This was the last time candidates on the debate stage got to show who can throw the meanest punch before the South Carolina primary. But it was also an important night nationally, as voters carefully consider their options before Super Tuesday next week.

Hosni Mubarak. Yesterday, the former Egyptian president, who ruled for nearly three decades before being ousted during the Arab Spring, died at age 91. During those 30 years, Mubarak was seen as a staunch US ally in the Middle East who cracked down on the rising radical Islamist movement and kept the peace between Egypt and Israel. But for many Egyptians, he was known as an autocrat whose government cracked down on journalists and activists. He resigned in 2011 after being ousted by pro-democracy protesters during the Arab Spring. And he was convicted in 2012 (but was retried and acquitted years later) over the deaths of more than 800 protesters during the uprising. Egypt announced three days of national mourning.

COVID-19 aka coronavirus. Yesterday, the CDC’s director called the virus’s spread in the US “inevitable.” And said the public should prepare for a potential pandemic. Note: COVID-19 has infected over 80,000 people and killed more than 2,700 others globally. Meanwhile, President Trump said the virus will “go away.” But US lawmakers have criticized the admin, including for downplaying the number of those infected.

President Trump and India’s PM Narendra Modi. Yesterday, Trump defended Modi on the topic of religious freedom – and refused to speak out publicly against a contentious Indian citizenship law. The law – passed last year – grants citizenship to religious minorities (think: Hindus, Sikhs, and Buddhists) from three neighboring countries: Bangladesh, Pakistan, and Afghanistan. But it excludes Muslims – the majority religion in those countries. Trump’s decision to support Modi comes amid deadly protests against the law that have killed at least 20 people and injured more than 180 others this week alone.

Skimm This: Our latest podcast ep explains what went down during Trump’s visit to India.

What’s been Bob-bing for CEOs…

Walt Disney Co. Yesterday, it said longtime CEO Bob Iger is stepping down. In his 15 years on the job, Iger led Disney to make a series of landmark purchases, including Pixar, Marvel, and entertainment assets of 21st Century Fox. He was widely considered one of the most successful entertainment CEOs in modern history. Now, after apparently pushing off retirement plans for years, he said he’ll take a step back to focus on the creative side of the biz – and will stay on as executive chairman. Disney’s newest CEO is Bob Chapek, who headed up Disney Parks. He just can’t wait to be king.