Daily Skimm: Coronavirus, Immigration in the US, and 'The Office' for Kids 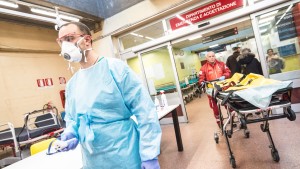 Dozens of countries are scrambling as COVID-19 continues to spread.

Where do we stand now?

The coronavirus has now reached six out of the world's seven continents (not Antarctica). The pace of the outbreak in China, where COVID-19 originated, seems to be slowing. But there are now more than 82,000 cases and at least 2,800 deaths worldwide. Earlier this week, new coronavirus cases were reported in Europe, including in Spain, Austria, Switzerland, and Croatia. Some cities in Italy are still on lockdown following an outbreak that's killed at least 12 people. On the other side of the world, a case was confirmed in Brazil, the first known case in Latin America.

There are now at least 60 cases of the virus, including the 42 Americans who were aboard the Diamond Princess cruise ship. Earlier this week, the CDC's director said the public should prepare for a potential pandemic. And San Francisco's mayor declared a state of emergency. But that's not all…

Yesterday, President Trump addressed the spread of COVID-19 in the US, saying the admin's no. 1 priority is the health and safety of the American people, and added that a vaccine is in the works. He also appointed VP Mike Pence to lead the US's team of public health experts and doctors working to combat the coronavirus.

COVID-19 has rattled governments and global markets. But in the meantime, officials say the best way to protect yourself includes doing what's necessary every cold and flu season: wash your hands, take care of yourself, and be prepared.

What gets to close its wallet if it wants to…

The Trump admin. Yesterday, a federal appeals court ruled that the Justice Dept can withhold money from states and cities that don't cooperate on immigration enforcement. Back in 2017, the DOJ said it would withhold grant money from sanctuary cities that refused to give federal authorities access to jails or let them know about an undocumented immigrant's release. Seven states and NYC sued, and a lower court ordered the DOJ to release the funding. But yesterday, a federal judge overturned that ruling, saying the federal gov gets to set the terms for the grant money it offers. The DOJ applauded the move, calling it a "major victory for Americans."

The Molson Coors shooting. Yesterday, a gunman opened fire at the brewing company in Milwaukee, WI, killing five people before dying by suicide. It's one of the state's worst mass shootings. Police say the 51-year-old man was an employee at the company, and are investigating a motive.

The Emmett Till Antilynching Act. Yesterday, the House passed the bill in a 410-4 vote. It makes lynching a federal hate crime. And was named after 14-year-old Emmett Till – murdered in a racist attack in Mississippi in 1955. The bill is considered long overdue, since nearly 5,000 people, mostly African Americans, were lynched between 1882 and 1968, with states failing to punish perpetrators in 99% of cases. Now, after 120 years of failed efforts to criminalize lynching on the federal level, this bill would make lynching punishable by up to life in prison, a fine, or both.

Where immigrants increasingly have a voice...

The US. A new report found that a record number of immigrants – 1 out of 10 Americans – are eligible to vote in the 2020 election. The study comes as Democratic candidates try to appeal to a diverse set of voters, with many immigrants represented in early voting states like Nevada – states that have the power to help shape the election.

Who's turning in her racket...

Maria Sharapova. Yesterday, the five-time Grand Slam champion announced she's retiring from tennis at the age of 32. During her decades-long career, she reached no. 1 in the WTA rankings. But it wasn't all love. In 2016, the tennis star failed a drug test and was later suspended for doping. She announced her retirement after a series of injuries, and says she's now ready "to compete on a different type of terrain."

What deserves a Dundie...