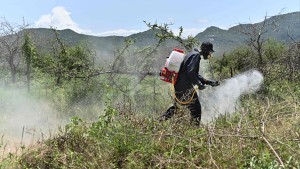 Correct. They're the world's oldest pest and its most damaging, destroying crops and threatening entire economies. But since last year, the problem has gotten worse. The suspect: climate change. Locusts thrive on warmer temperatures and heavy rainfall. And with more extreme weather conditions like recent cyclones, they've migrated more easily to parts of East Africa, including Kenya, Ethiopia, Somalia, Uganda, and South Sudan. Now, swarms have also reached Saudi Arabia and Pakistan. For weeks, the UN has been warning of a humanitarian crisis.

Yes: this is the worst locust outbreak in generations. And it's threatening crops and people's livelihoods. Even a small swarm (think: less than a square mile) can devour enough food for 35,000 people daily. That, in a region where about 19 million people already face food insecurity. The UN warns that the number of locusts could continue to skyrocket over the next few months. It's worried the outbreak will lead to even more food shortages as planting season begins in the spring.

How did things get so bad?

A combination of factors. Like we said, there've been unusual weather patterns linked to climate change. But what's making matters worse: some countries, like Kenya and Ethiopia, lack the tools to combat the plague (think: pesticides). And in Somalia, pest controllers can't reach certain areas due to the civil war there.

So what needs to happen?

The UN says it'll cost at least $138 million to contain the plague. But so far, donors have only committed a little over a third of that. Somalia and Pakistan have declared a state of emergency. At one point, China seemed ready to send an army of ducks to neighboring Pakistan to help contain the outbreak. But then it apparently decided 'nvm, pesticides work, too.'

Locusts swarms have ravaged countries in East Africa for years, but climate change seems to be making matters worse. Now, the region is on a deadline to keep this crisis from escalating as millions of human lives are at stake.

COVID-19. The pneumonia-like virus has now killed more than 2,800 people and infected more than 83,000. Earlier this week, the CDC said the US may have its first "community spread" case after a California woman contracted the virus without traveling to an affected area or having been exposed to a known patient. Other countries have also taken precautions to try to curb the spread of the coronavirus, including Saudi Arabia. Yesterday, it banned pilgrims from entering the kingdom, months before the annual hajj pilgrimage that takes place at Mecca, that's attracted nearly 2 million people in the past.

Skimm This: Our latest podcast ep talks about the California patient and how the US gov is testing for COVID-19.

Where people can earn their "I Voted" sticker...

South Carolina. Tomorrow, Democratic voters head to the polls in the last primary before Super Tuesday next week. Eyes are on former VP Joe Biden, who's leading in the polls after an underwhelming performance in earlier races. He's followed by Dem front-runner Sen. Bernie Sanders (I-VT) and then billionaire Tom Steyer, who's reportedly spent millions to woo voters in the state. As we saw in this week's debate, race is a key talking point in South Carolina, a more diverse state than some others that have held caucuses and primaries so far.

Skimm More: Don't want to miss any major 2020 election dates? theSkimm App gives you a heads-up on when events like primary races and debates are going down. Download the app and start your free trial.

Why public health officials are concerned...

This survey. According to the CDC, about four in 10 American adults are obese – and nearly one in 10 is severely obese. The data, taken from 2017-2018, suggests that obesity rates are significantly higher than 50 years ago – when about one in 100 Americans were severely obese. The findings indicate that more Americans could be at risk for diabetes, heart disease, and cancer. Some are also blaming the gov for not pushing measures that promote physical activity and healthier eating habits.