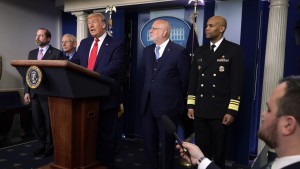 The US reported its first deaths from COVID-19.

A man in his 50s and another in his 70s. Both were from Washington state and had underlying health conditions. But the virus isn't limited to the West Coast.

More than 80 cases have been reported nationwide, including the first confirmed case in New York City. And this morning, an adviser to Iran's supreme leader has reportedly died after contracting the virus – making him the first gov official to die from COVID-19. There are now more than 88,000 cases and at least 3,000 deaths worldwide.

How is it transmitted?

Wash your hands. For at least 20 seconds. Use hand sanitizer between washes. Avoid handshakes. Avoid touching your eyes, nose, and mouth.

Not unless you are sick or caring for someone who is sick. Most don't effectively block droplets that carry viruses. For the ones that do, there's a shortage and public health workers need them.

They're not very specific. But at first they can seem similar to a cold or the flu (think: fever, cough, sore throat, difficulty breathing). Call your doctor if you're experiencing symptoms and have been around an infected person or traveled to an affected area like China, South Korea, Italy or Iran.

That's in the works. But with trials, testing, approval, and scaling up production, a vaccine may not be widely available for at least a year.

It's killed more people than the 2002-2003 SARS outbreak and MERS combined. But we still can't be sure of the fatality rate. It's estimated at over 2% in China, but that could change as the outbreak continues. Already, the virus seems significantly more contagious and deadly than the flu.

What is the government doing about it?

President Trump has been urging calm. He put VP Mike Pence in charge of the response, who later added a public health official. Trump has also suggested that warm weather could lessen the outbreak.

We don't know yet. Some viruses – like the flu – have peak seasons during winter, though it is possible to contract them year-round.

Is it still ok to travel?

There are travel advisories for certain countries. Read up on the government's guidelines before going abroad.

The number of COVID-19 cases has grown, rattling markets. But governments and health officials are urging people to stay calm and are taking steps to contain the outbreak.

Psst...You might have heard that the Dow and S&P 500 had their worst week since the 2008 financial crisis. Here's why the coronavirus has investors worried – and what its spread could mean for your wallet.

Who had a very good weekend...

Former VP Joe Biden. Over the weekend, he added a victory to his campaign by winning the South Carolina Democratic primary – by nearly 30 points. South Carolina is more diverse than some of the earlier states that voted this year...and Biden won with more than 60% of African-American voters' support. His big win took place just before Super Tuesday (tomorrow) when voters in 14 states say 'I choose you' to their favorite candidate. Sen. Bernie Sanders (I-VT) came in second in South Carolina, and is still the Dem front-runner after strong showings in Nevada, New Hampshire, and Iowa.

The US and the Taliban. Over the weekend, they struck a deal paving the withdrawal of US forces in Afghanistan and ending America's more than 18-year war there. Under the agreement, the US would withdraw over 4,000 forces within the first 135 days. And the rest (more than 8,000) would leave within 14 months – depending on whether the Taliban fulfills its end of the bargain, including cutting ties with terror groups like al-Qaeda. The US's historic deal comes after more than a year of on-and-off negotiations with the militant group.

Where voters are hoping the third time's the charm...

Israel. Today, Israelis will be voting in the third parliamentary election in less than a year. On the ballot are some familiar names: Israeli Prime Minister Benjamin Netanyahu (who's been indicted on bribery and fraud, among other things) and former army chief Benny Gantz. Reminder: No party has won a majority in the last two elections. And neither Netanyahu or Gantz were able to form a coalition gov. Polls are showing another potential stalemate between the two, meaning a fourth election isn't off the table.

Joe Coulombe. Last week, the founder of Trader Joe's died at age 89. Coulombe opened the first Trader Joe's grocery store in 1967 in Pasadena, California – later expanding to hundreds of stores in dozens of states. Trader Joe's remembered him as "an extraordinarily smart and accomplished entrepreneur." RIP

Who got everyone in formation…