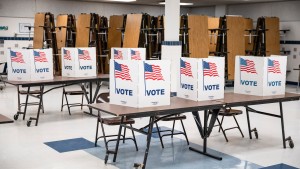 Is this about Super Tuesday?

It is. Yesterday, voters in 14 states turned out to pick their favorite presidential candidates. It’s the single biggest day of voting in the primary season, awarding about a third of all the delegates up for grabs in the Democratic race. And most of the results are in.

So what’s the verdict?

Exactly. He came into Super Tuesday with only one primary win under his belt: South Carolina, thanks in large part to support from black voters. Then, earlier this week, in a move seen as moderates trying to stop Sanders in his tracks, Biden got endorsements from Sen. Amy Klobuchar (D-MN) and former South Bend, IN Mayor Pete Buttigieg. Both had dropped out and said ‘Biden’s your guy, vote for him instead.’

Got it. And the others?

Former NYC Mayor Mike Bloomberg won US territory American Samoa. But the other two candidates still in the Democratic race – Warren and Rep. Tulsi Gabbard (D-HI) – ended the night without winning a single state. Now, only time will tell if Warren, Gabbard, and Bloomberg are the next to go. Bloomberg plans to reassess his campaign today.

What about the Republicans?

While one state Republican Party canceled its primary (hi, Virginia), the other 13 states went through with their races. You might have heard of the leading candidate: President Donald Trump. He breezed through Super Tuesday against former Massachusetts Gov. Bill Weld, winning the vast majority of delegates.

More where that came from. The next contests are on March 10. And don’t forget the last two Dem debates of the primary season. First up: debate no. 11 on March 15.

Sanders entered the biggest day of primary voting as the indisputable front-runner. But after a wave of moderate candidates dropped out and lined up behind Biden, the former VP now officially has more delegates…and a viable pathway to the Democratic nomination.

COVID-19. Yesterday, the Federal Reserve made an emergency cut to interest rates in hopes of curbing economic fallout from the virus. It’s the first emergency cut (and the biggest one-time cut) the Fed has made since the 2008 financial crisis. The Fed chair said the goal was to boost the economy while the situation is “fluid.” But the move didn’t stop investors from turning from stocks to bonds, driving the 10-year Treasury yield below 1% for the first time, ever. The news came amid the virus’s growing death toll, which now stands at more than 3,000 people globally and at least nine in the US. The CDC has encouraged people to take certain measures to prevent its spread, including asking people to stay home if they feel ill.

Psst…here’s what lower interest rates mean for your debt, savings, and money goals.

Tennessee. Gov. Bill Lee (R) declared a state of emergency after tornadoes struck Nashville and several counties, killing at least 24 people. It’s one of the deadliest tornado events in US and Tennessee history. More than 100 structures were destroyed, numerous people have lost their homes, and tens of thousands are without power. The disaster also affected voting in the state: some Super Tuesday voters had to be rerouted to other polling stations, and voting hours were extended.

This asteroid. First spotted by NASA in 1998, the asteroid will apparently be making its long-awaited flyby on April 29. But no need to worry, it won’t collide with our planet.

Who’s a(parrot)ly smarter than we thought…