Daily Skimm: COVID-19 Funding, Climate Change, and the Return of the Dixie Chicks 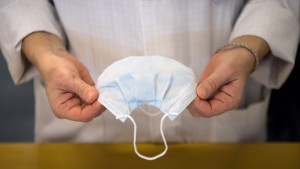 Governments around the world are ramping up their response to COVID-19.

The coronavirus has infected more than 95,000 people worldwide, killing more than 3,200. The virus was first reported in China in December and is just starting to slow down there. But in European countries like Italy – which is suffering the largest outbreak outside of Asia – the numbers show no sign of slowing down yet.

What about in the US?

More than 150 people are infected and at least 11 people have died. Most of the deaths have been in Washington state – causing some schools in the greater Seattle area to close. Meanwhile, California declared a state of emergency after the state's first death from the virus.

So how is our gov helping?

With money. Yesterday, the House passed an $8.3 billion bipartisan spending bill aimed at fighting the outbreak. The money will go towards expanding health care access to seniors, who are at greater risk of getting COVID-19. It will also help fund research for vaccines and testing. And some of it will be allotted to provide medical supplies for state and local health agencies. The bill still needs to go through the Senate for approval before it heads to the White House – which President Trump is expected to sign. This comes days after the Federal Reserve cut interest rates to try to put people in more of a spending mood. Because outbreaks like this can affect the economy and your wallet.

And what about the response abroad?

In South Korea, Australia, and Malaysia, officials are trying to curb the economic fallout with stimulus packages and interest rate cuts. In Italy, the gov ordered all schools (including day cares and universities) to shut down until mid-March – affecting more than 8 million students. It also ordered spectator-free soccer matches and banned other public gatherings until at least next month. Officials in Italy and France have even advised people not to hug or kiss when greeting.

What should I do?

Keep washing your hands. If you feel symptoms like a fever, cough or difficulty breathing, and think you need to be tested for COVID-19, the CDC says you should first call your doctor before visiting their office. They will then work with your state's health officials to determine if you need to be tested.

While COVID-19 shares similar symptoms to other viruses like the flu, it appears to be deadlier and more contagious. But unlike the flu, there isn't a vaccine for it yet. Governments are taking various efforts to contain it. But in the meantime, stay calm and make sure you're prepared.

The Democratic primary field. Yesterday, former NYC Mayor Mike Bloomberg (and his $$$$) dropped out of the 2020 presidential race after a disappointing defeat on Super Tuesday. And he endorsed new Democratic front-runner: former VP Joe Biden – who officially got his 10th Super Tuesday win after Maine's results were finalized. This leaves four Dems still in the race for prez...but TBD for how long. Sen. Elizabeth Warren (D-MA) is apparently reassessing her campaign after a rough showing on Super Tuesday, including coming in third in her home state of Massachusetts.

...Oh and speaking of former candidates, entrepreneur Andrew Yang is considering saying 'I wanna mayor you' to NYC.

What's got climate change on the mind…

This study. Yesterday, scientists said that some tropical forests are taking in less carbon dioxide than they did in the '90s. And that by 2035, Amazonian trees won't absorb any carbon dioxide at all. Science 101: humans take in oxygen and give off CO2 – which trees and plants absorb. It's the perfect relationship. But this study shows more carbon dioxide (a greenhouse gas known to contribute to global warming) would remain in the atmosphere and could add to Earth's rising temps.

This other study. Scientists have found that extreme weather – intensified in part by human-caused climate change – increased the chances of Australia's wildfires by at least 30%. Reminder: These wildfires were some of the worst Australia had seen in decades, burning millions of acres, killing at least 34 people, and displacing thousands of others. This study says similar fire conditions are more likely if the Earth's temperature keeps climbing.

While this bird is fleeting…

These Chicks are singing.