Daily Skimm: The Coronavirus, Lebanon's Debt Crisis, and a Rowing Record in the Books 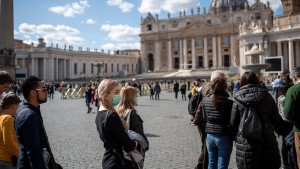 More than a quarter of Italy's population is on lockdown.

Over the weekend, as Italy saw its largest daily rise in reported COVID-19 infections, the government quarantined parts of the northern region, where 85% of cases in the country have been reported. Now, more than 16 million people are on lockdown. Residents trying to leave the region could be hit with fines or jail-time as punishment for breaking quarantine rules.

Will that stop the spread?

Italy hopes so. And that it prevents hospitals from being overwhelmed with patients. But the lockdown – which impacts cities like Milan (the country's financial hub) and Venice (a major tourist destination) – could push the country's already fragile economy into recession. The quarantine is scheduled until at least April 3. Italy's move highlights how various countries are dealing with their outbreaks:

China…where the word is containment. Since January, millions have been in lockdown in Wuhan, where the outbreak was first reported. Over the weekend, the number of reported infections outside of Wuhan reportedly dropped significantly. And at least 53,000 of those known to have been infected have recovered. The World Health Organization has praised China's tough response. But many people there are experiencing anxiety and depression.

South Korea…where the country has declared "war" on the coronavirus. And has tested more than 140,000 people, including at drive-thru clinics. The country's current fatality rate appears to be around 0.6% (for context, the WHO estimates that the global fatality rate is 3.4%). South Korea's widespread testing could be the reason for the lower number.

The US…which is moving toward a "mitigation phase" according to the surgeon general. He's urging calm as the number of infections topped 500 and at least 22 people have died. New York is the latest state to declare a state of emergency to combat the outbreak. And South by Southwest canceled its conference, affecting more than 400,000 people.

COVID-19 is now in over 100 countries, with 300 million children out of school. Millions of people are in lockdown, as governments take a variety of approaches to stop the virus from spreading.

Skimm More: We Skimm'd what you need to know about the virus and how you can protect yourself.

Lebanon. Today, the country is expected to default on $1.2 billion of debt. Since October, the country has been steeped in a political and economic crisis, with anti-government protesters criticizing the gov over things like corruption, mismanagement, and high youth unemployment. Now, after weeks of negotiations with the IMF, Lebanon is set to default on $1.2 billion in debt. The move – the first default in Lebanon's history – could require the gov to set up austerity measures. It's unclear whether this could lead to further political instability.

Oil prices. Yesterday, they had their largest single-day drop since 1991. Here's how we got here: last week, Saudi Arabia and the rest of OPEC couldn't convince Russia (a major oil producer) to cut production amid a decrease in global demand due to the coronavirus outbreak. In a retaliatory move, Saudi Arabia did a 180 by slashing its prices, and it reportedly plans to boost oil output. It's seen as the start of a price war against Russia. In response, oil markets dropped about 30%. While Saudi Arabia and Russia duke it out, you might do a fist (gas) pump: you might see lower prices when filling up your tank.

Girls. Yesterday, tens of thousands of women across the world turned out for International Women's Day. Demonstrators protested a variety of issues, including gender-based violence, discriminatory laws, and lack of abortion access. In Pakistan, women faced violence from counter-protesters, who threw stones and shoes in rejection of the rally's slogan "my body my choice." And in Turkey, police used tear gas to break up a demonstration of thousands of women.

Who's getting shipped off to Northern Ireland…

Mick Mulvaney. On Friday, President Trump ousted his acting chief of staff and banished him to Northern Ireland (read: made him the US envoy there). The move comes months after Mulvaney seemingly acknowledged (then denied) there was a quid pro quo with Ukraine. Now, Trump's replaced Mulvaney with Rep. Mark Meadows (R-NC), who proved himself a staunch Trump ally during the impeachment hearings. He's the fourth guy in the role, after Mulvaney, John Kelly, and guy-whose-name-you-still-can't-pronounce Reince Priebus.

When one woman flips the switch...

Another reportedly sets a record.