Daily Skimm: Democratic Primaries, the Coronavirus, and Chlamydia at Sea 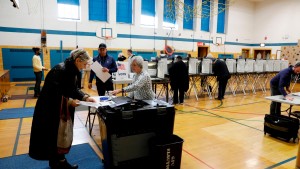 Six states turned out for what's known as "Super Tuesday II" – like last week's Super Tuesday, but with fewer delegates at stake. Heading into the day, Biden had 664 delegates compared to Sen. Bernie Sanders' (I-VT) 573. Reminder: the magic number is 1,991 to cinch the Democratic nomination.

Biden took home Idaho, Mississippi, Missouri, and most importantly, Michigan, with overwhelming support from black and moderate voters. Michigan was the biggest prize of the night with the most delegates up for grabs (125), and had a higher voter turnout than the 2016 primary. This was also a blow to Sanders, whose 2016 win there propelled his campaign forward for months. Biden's victory in Michigan could be a sign that he'll win more states in the Midwest, with Ohio and Illinois voting next week. We're still waiting on results from North Dakota and Washington. Also: reminder that Rep. Tulsi Gabbard (D-HI) is still in the race.

Right. What about the Republican side?

You may be shocked to learn that President Trump hasn't had much of a fight. Republicans have been turning out in historic numbers to vote for him over his sole remaining primary competitor, former Massachusetts Gov. Bill Weld. And yesterday was no different: Trump is projected to win all six states.

The primary season is all about the math. And while there are still a bunch of primaries and caucuses left, the Dem delegate numbers are in Biden's favor so far. Last night's results further solidified his front-runner status...and the likelihood that he'll become the Democratic presidential nominee.

Where troops are being assembled…

New York. Yesterday, Gov. Andrew Cuomo (D) deployed the National Guard in the New York City suburb of New Rochelle – the epicenter of the state's coronavirus outbreak with 108 confirmed infections. There's now a one-mile radius "containment zone," with schools and places of worship closed through March 25. If you're wondering how troops fight the coronavirus, here's how: by disinfecting public areas and delivering food to the hundreds of people there under quarantine. Meanwhile, markets yesterday bounced back a bit after the Dow Jones Industrial Average had its worst day since 2008 on Monday. The turnaround came amid news that the Trump admin was prepping a stimulus package to deal with the coronavirus – but the president and lawmakers have yet to agree on what that will entail. There are more than 1,000 confirmed infections in the US and at least 30 deaths.

Who's saying 'tsar-ry not sorry'…

Russian President Vladimir Putin. Yesterday, he backed a proposed constitutional amendment that could allow him to stay in power until 2036. Russia's constitution says presidents can only serve two six-year terms in a row. For Putin, that means he has to step aside in 2024. But today, Russia's lower house of parliament gave its final approval to a constitutional amendment that would reset the clock on Putin's presidential terms, allowing him to run for two more terms. Next up: the country's constitutional court needs to give it the ok before it goes to a nationwide referendum next month.

Canada. Earlier this week, the gov there introduced legislation to criminalize LGBTQ+ conversion therapy. The practice intends to change a person's sexual orientation or gender identity through things like hypnosis and talk therapy. But it's been widely discredited: studies show it can cause mental health issues like anxiety and depression, and the UN has called for an end to the practice. Now Canada's on track to become the fourth country to ban conversion therapy, following Brazil, Malta, and Ecuador. Two Canadian cities and the province of Ontario – as well as 20 US states – have already banned the practice. Several other countries are also considering nationwide bans.

Where you don't expect to find chlamydia...