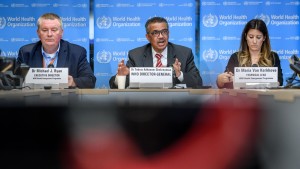 Last night, President Trump took the mic to talk to America about the coronavirus.

He gave a couple of key updates. The main one: the US will stop some travel from Europe for 30 days, starting Friday at midnight. The Department of Homeland Security said the ban applies to foreign nationals who've been in Europe (minus the UK) ahead of their trip to the US. That's after Italy updated its lockdown to close most businesses and stores in the country other than pharmacies and grocery stores. There were also some financial updates.

The stock market's been on a rollercoaster. Yesterday, the Dow entered a bear market* for the first time since 2009. So Trump's directing the Small Business Administration to begin offering low-interest loans to businesses affected by the outbreak. He also said he would ask Congress for payroll tax relief. And direct the Treasury Department to defer tax payments for some of those impacted by the virus. But that's not all.

All of this came the same day the World Health Organization declared COVID-19 a pandemic. Basically, it means an epidemic...but on a global scale. The WHO has resisted using the term for weeks, but it's using it now as a wake-up call. And added that "all countries can still change the course of this pandemic" by doing things like testing, treating, and isolating people. So far, the coronavirus has infected more than 124,000 people around the world. Tom Hanks is among them.

Yes. Yesterday, he said he and his wife Rita Wilson tested positive. And Utah Jazz player Rudy Gobert reportedly did too – prompting the NBA to suspend all games "until further notice." The NCAA also announced that fans won't be allowed to attend the men's and women's March Madness tournaments (which start next week).

The best way to protect yourself remains common-sense guidelines including hand-washing and, where appropriate, "social distancing" (example: working from home). For those who are 60 and older – and those with diabetes, heart disease, or lung disease – the government is recommending extra precautions, including avoiding crowds and nonessential travel. Kids and pregnant women are not known to be especially at risk.

It's unclear when this will end. And a lot of people are feeling scared. But one thing we can do is take on basic hygienic techniques to reduce the risk of contracting the respiratory disease and spreading it to those among us who are most at risk.

*Thing to Know: Bear market. When investment prices drop at least 20% from a recent high. Here's what that could mean for your wallet.

What has people talking about immigration...

This policy. Yesterday, the Supreme Court said the Trump admin can keep tens of thousands of asylum-seekers in Mexico while immigration authorities process their claims. Last month, a federal appeals court temporarily blocked the policy – known as "Remain in Mexico." It ruled that the policy violated US law that prevents sending people to countries where their lives or freedoms would be threatened. Yesterday, SCOTUS weighed in and said the program can stay put in California and Arizona...for now. In the meantime, the case can play out in lower courts again.

Where Harvey Weinstein will be for the foreseeable future…

Prison. Yesterday, the former Hollywood producer was sentenced to 23 years after he was convicted last month of a criminal sex act and rape. Weinstein said he had "great remorse for all the men and women" involved in the #MeToo movement. The Manhattan district attorney said the sentencing in the landmark case puts sexual predators "on notice." This comes as the Los Angeles County District Attorney's office said it's preparing to extradite Weinstein to California on sexual assault charges.

Who's not scoring points…

The US Soccer Federation. Earlier this week, it argued that the US women's national team gets paid less because the men's national team "requires a higher level of skill" and "more responsibility." Yup. You read that right. This is in response to a gender discrimination lawsuit the women's soccer team filed last year. A trial is scheduled for May, but both sides wanted to settle this earlier. Now, the federation's court filing this week – part of its attempt to get the case dismissed – is sparking backlash. Including from its top sponsor Coca-Cola, which called the comments "unacceptable and offensive." The federation apologized, saying the comments don't reflect its values.