Daily Skimm: Primaries and COVID-19, Tom Brady, and Penguins on the Loose 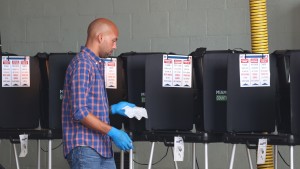 Arizona, Florida, and Illinois. Ohio was also supposed to vote but said ‘rain check’ to protect residents from the coronavirus. States that forged ahead cleaned voting booths, provided things like hand sanitizer and wipes, and tried to keep people at least six feet apart. The outbreak came with a spike in early voting and low in-person turnout. In all three states, some poll workers didn’t show, causing officials to move polling locations and extend poll hours.

Former VP Joe Biden won all three states, securing his lead over Sen. Bernie Sanders (I-VT) as the Democratic front-runner. But the winner of last night’s primaries wasn’t top of mind nationwide, seeing as it was overshadowed by the current state of the country.

Coronavirus infections have been reported in all 50 states, with at least 100 people confirmed dead. That number is expected to spike as officials ramp up testing and get a clearer picture of the virus’s reach. The mayor of New York City said he’s considering a shelter-in-place order and would make a decision by tomorrow. The San Francisco Bay Area already knows what that’s like. In North Carolina, the Outer Banks are restricting access to visitors and tourists. And Florida’s gov ordered all bars and nightclubs to close for 30 days and limited beach parties to 10 people per group.

COVID-19 is continuing to rattle all areas of American life…including basic democratic institutions. When asked what the gov is doing to protect elections, Trump said “it’s very simple” – it’s trying to get rid of the virus. With some hospitals already showing signs of strain, that day could be months or more away.

The gov is stepping up its stimulus game. Yesterday, it announced new efforts to help curb the financial stress caused by the coronavirus. Here’s what it has in mind:

Direct payments: The Trump admin wants Congress to green-light a $1 trillion stimulus package. That would include checks to Americans in the next two weeks. Although an exact amount hasn’t been agreed upon, Treasury Secretary Steve Mnuchin suggested checks could be larger than $1,000.

Taxtension: The gov is postponing the April 15 tax-payment deadline. July 15 is the new deadline for paying your federal tax bill – as long as you owe the gov less than $1 million. You still have to file by April 15 (or request an extension with Form 4868), but you can delay payment without interest or penalties. Some good news in a sea of less-good news.

Psst…here’s what all this could mean for your wallet.

What’s saying ‘you can’t sit with us’…

China. Yesterday, the country said it will revoke press credentials for US journalists from the New York Times, Washington Post, and Wall Street Journal. Their credentials were due to expire at the end of the year, but China’s saying ‘hand them over ASAP.’

Which breakup feels personal in Boston…

Tom Brady and the Pats. Yesterday, the six-time Super Bowl QB said goodbye to the New England Patriots – ending his 20-year career with the only NFL team he’s ever played for. Brady – a free agent for the first time – sang ‘hey, hey, Tampa Bay,’ agreeing in principle to join the Tampa Bay Buccaneers in a $30 million per year deal, give or take. Everyone be kind to Julian Edelman today.

What some people are using to stay entertained…

The internet. There are several places that offer free trials to stream movies and shows. The Met is offering free streaming of operas. Museums have virtual tours. And celebrities (like Ben Platt, John Legend, and Keith Urban) hosted virtual dance parties and concerts. Oh, and if you’re still trying to figure out how to best WFH (with or without kids around), we have a guide for that.

What’s saying ‘waddle while you work it’…