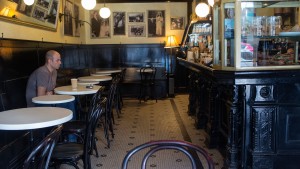 NOT BUSINESS AS USUAL

The coronavirus pandemic has wracked multiple industries and led to a spike in layoffs across the country. A Federal Reserve official warned the unemployment rate could hit 30% in the coming months, much higher than during the 2007-2009 recession. Here are some of the industries that have already taken a hit:

The restaurant industry…as in, it's the country's second-largest private employer with 15.6 million workers. Many are without jobs as some state govs mandate that restaurants only provide takeout service or delivery. But many restaurants have closed on their own in efforts to follow stay-at-home guidelines, or because they can't afford to pay their workers.

The hospitality industry...as in, about 4 million of its workers are expected to lose their jobs in the coming weeks. Hotels across the US are seeing unprecedented cancellations and closures. This week, Marriott – the world's largest hotel company – announced it's furloughing tens of thousands of employees.

The airline industry…as in, the jobs of 750,000 people are in jeopardy. Some of the largest airlines in the US – American and Delta – are already asking employees to volunteer for unpaid leave. The industry is also reducing flights, parking hundreds of planes, and cutting corporate pay.

No. But it's not all bad news. Some industries are switching courses and looking to help out…

Retail...as in, many brands (like Christian Siriano, American Apparel, and Hanes) are using their resources to make masks and other protective gear for hospital workers. And other companies (like Target and Apple) are donating masks.

Automobile industry...as in, some automakers (GM, Ford, and Tesla) have been given the green light to produce ventilators. The decision to switch manufacturing hats could mean that some of GM and Ford's closed factories could open back up.

Essential services...as in, some companies have their 'help wanted' signs up. Dollar General will hire up to 50,000 workers in the coming weeks. Papa John's is hiring up to 20,000 as demand for pizza goes up. CVS Health is looking to fill tens of thousands of jobs across the country. And companies (like Walmart, Amazon, Kroger, and Trader Joe's) are also hiring.

And how is the gov helping out?

In several ways. The Fed's rolled out several programs that will provide up to $300 billion to help stimulate the economy. And is expected to announce the "Main Street Business Lending Program" – which would help small to mid-sized businesses stay afloat. As well as the TALF (used during the 2008 financial crisis) to provide credit to consumers and businesses. Meanwhile, multiple trillion-dollar coronavirus relief packages are being discussed in Congress, and could provide loan programs for small businesses and industries.

The coronavirus pandemic has affected daily life worldwide, and has already led to tens of thousands of people losing their jobs in the US alone. While the gov and other companies are stepping in to help, more job losses are expected – and the fallout could have lasting effects on the economy.

Hong Kong, Singapore, and Taiwan responded to their coronavirus outbreaks quickly, with things like lockdowns, social distancing, and mass testing. For weeks, they've been praised as the number of new reported infections has gone down. But now, as they put 'open for business' signs back up, the numbers of infections are on the rise.

The cases raise the question: how soon is too soon to go back to normal? President Trump wants an answer ASAP. He said his admin will decide Monday whether to ease White House guidelines on things like social distancing, which has taken a hit on the economy. While Trump wants to get a handle on the virus, he says we shouldn't let "the cure" for the virus become "worse than the problem itself."

But places like Singapore, Hong Kong, and Taiwan seem to have a different mindset. With infections on the rise, they're jumping right back into fight mode, quickly bringing back strict travel restrictions and quarantines. It comes as health experts are gearing up for the long haul, warning of multiple waves of the virus before the global community can get a handle on it with things like a vaccine or treatment.

PG&E. Yesterday, the gas and electric company agreed to plead guilty to 84 counts of involuntary manslaughter in connection to the 2018 Camp Fire and one count of unlawfully causing a fire. Reminder: An investigation found that the company's equipment sparked the Camp Fire – California's deadliest wildfire in history. If approved, the plea agreement will see PG&E pay about a $3.5 million fine. And fund efforts to restore the residents' access to water for the next five years. The company said it hopes this "will help the community move forward from this tragic incident." But some of the victims don't think this is enough to hold the company fully accountable.

Secretary of State Mike Pompeo. Yesterday, he made a surprise visit to Kabul, Afghanistan in hopes of pushing forward last month's peace deal with the Taliban. Reminder: The US and the Taliban signed a peace deal to pull all US forces out of Afghanistan by spring 2021. But Afghanistan and the Taliban have yet to reach their own peace agreement. This is in part due to the country's current political tensions (think: two political opponents have each claimed to be the country's president). Pompeo's some eight-hour trip appeared to end with no update on the deal.

Canada and Australia. This week, the two countries' Olympic committees said they won't be sending their athletes to the Tokyo Olympics this summer. The reason: to protect them and others from exposure to the coronavirus. Both committees, along with the US Olympic and Paralympic Committee, are pushing for the Olympic Games to be postponed until 2021. The International Olympic Committee is giving itself a few more weeks to decide whether it'll postpone the games this year.

The key to happiness.