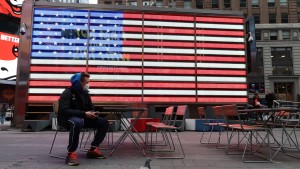 The US could become the new epicenter of the coronavirus pandemic.

The World Health Organization. There are now more than 50,000 confirmed infections in the US. More than 700 people have died, 163 of whom reportedly died yesterday. Things are especially bad in New York.

Lots of people, very close together. The state has half of all confirmed US cases: more than 25,000. And the number of infections is doubling every three days. The outbreak there is expected to hit its peak in two or three weeks. Gov. Andrew Cuomo (D) is begging the federal gov to help it get a minimum of 30,000 ventilators, ASAP.

Where's the federal gov on that?

Sending 4,000 ventilators. Out of the 12,700 it has on hand. Cuomo says it's not enough – and wants the Trump admin to require companies to start making more using the Defense Production Act. But the admin is reluctant to force companies' hands. Meanwhile, President Trump is considering easing coronavirus restrictions soon to save the economy. He says he wants the country "opened up" by Easter, aka April 12. But health experts and lawmakers warn that easing restrictions too soon could be disastrous for both the health care system and the US economy.

Speaking of, when is help coming for struggling Americans?

Sooner rather than later. Lawmakers and the Trump admin reached a deal early this morning on a nearly $2 trillion stimulus package. The full details have yet to be released but would include things like: hundreds of billions of dollars to companies, a boost for unemployment insurance, and $1,200 checks to most Americans (with more money for families). Congress still needs to approve the package, but Senate Majority Leader Mitch McConnell (R-KY) says the Senate plans to vote on the bill later today.

Weeks ago, many saw COVID-19 as a problem happening far away. Now, New York has more cases per person than Italy...and it hasn't even reached the peak of its outbreak. The time to flatten the curve is now.

Almost a fifth of the world's population is on lockdown. Yesterday, India's PM Narendra Modi ordered the country's 1.3 billion people to stay at home for at least 21 days.

It's the world's largest lockdown, and brings the fifth biggest economy to a near standstill. Essential services like grocery stores, banks, and pharmacies can remain open. But virtually everything else is closed. It comes as the government has 500 confirmed infections across the country, though it's believed a lack of widespread testing explains the low numbers.

One key question: how the government will enforce social distancing in a country with densely packed cities. 300 million Indians live below the poverty line, many living in slums and with lack of access to clean water. The government is working on a financial relief package. And says the move is necessary to avoid setting the country back decades.

What some states are trying to enforce...

Abortion bans. Texas and Ohio have ordered most abortions to be considered nonessential surgeries. Meaning, they have to be postponed until the coronavirus pandemic is over. The reason: officials in both states say they need to preserve PPE (personal protective equipment) for health care workers and make space for coronavirus patients. But the bans were condemned by abortion activists, who've accused state leaders of using the coronavirus pandemic to push forward their own political agendas.

GLAAD. The LGBTQ+ advocacy org launched a petition to lift some restrictions on blood donations from gay and bisexual men to help with the nationwide blood shortage. Last week, the American Red Cross said it had received 86,000 fewer blood donations after thousands of blood drives were canceled. But since 2015, the FDA has had restrictions in place for gay and bisexual men who want to donate blood (think: they can't have sexual contact with other men for 12 months before donating). GLAAD says the policy is "antiquated" and "absurd." The FDA reportedly said its guidelines have "not changed" and that it'll continue to assess as the coronavirus pandemic continues.

Where people more fit than us will not be headed...

Japan. Yesterday, the International Olympic Committee said it's delaying the Summer Olympics in Tokyo until next year. Because of, you guessed it, the coronavirus. It's the fourth time since the modern Olympics in 1896 that the games aren't taking place as planned – they were canceled once during WWI and twice during WWII. And it's the first time the Olympics have ever been postponed. The decision is expected to take an economic hit on Japan, reportedly shrinking the country's GDP by 1.5%. But IOC leaders hope the future date will "stand as a beacon of hope to the world during these troubled times."

While Netflix will test out its experiment again...

This couple is proving love knows no bounds.