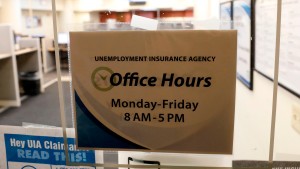 Nearly 3.3 million – the largest weekly uptick in claims since the Labor Dept began collecting data in 1967. It's the biggest sign yet of the economic damage from COVID-19. The numbers stood at about 280,000 earlier this month. But as businesses were forced to close or limit their services, laying off or furloughing workers, unemployment claims have skyrocketed.

So...does this mean we're in a recession?

Not yet – a recession happens when the economy has a significant decline for at least six months. But economists pointed out that during the Great Recession (2007-2009), the highest number of unemployment claims per week stood at about 665,000. Last week was about five times more than that. Experts predict that number to go up in the coming weeks as layoffs and bankruptcies continue. Some economists estimate about 14 million people (around 4% of the US population) will lose their jobs by the summer. It wasn't the only tough news from yesterday.

Yesterday, the US became the country with the most reported cases of COVID-19 in the world, surpassing Italy and China. About 85,000 people are known to be infected and more than 1,000 have died. Earlier this week, President Trump said he'd "love" to have the country ready to go by Easter. Now, he's taking the weekend to reassess his plans to "open up" the country by reducing coronavirus restrictions.

It's become increasingly clear that COVID-19 is wreaking havoc on Americans. Unfortunately, experts warn the fallout is likely to get worse before it gets better.

Skimm More: Do you or someone you know need to file for unemployment? We explain how to here.

As millions of people stay home to contain the spread of COVID-19, advocates for domestic violence survivors worry the number of people in need of help could grow. Experts say guidelines like social distancing, stay-at-home orders, and stress from the pandemic put a survivor at greater risk of their abuser.

Every year, more than 10 million Americans experience domestic violence. Already, the National Domestic Violence Hotline is getting reports of abusers using the coronavirus as an opportunity to harm domestic partners. Some survivors are not going to shelters or the hospital when needed out of fear of getting the virus. Others are leaving shelters altogether for the same reason.

To help, some orgs are offering remote services like counseling. And recommend survivors create a safety plan, practice self-care, and reach out for help.

If you or someone you know is experiencing domestic violence, contact the National Domestic Violence Hotline by calling 1-800-799-7233. If you're unable to speak safely, you can log onto thehotline.org or text LOVEIS to 22522.

Who's a wanted man…

Venezuelan President Nicolás Maduro. Yesterday, the US Justice Department charged him and several of his associates with alleged narcoterrorism, drug trafficking, and corruption. Attorney General William Barr said those charged caused "tons of cocaine to enter and devastate American communities" for over 20 years. And that for years, Maduro headed up a violent drug cartel known to work with Colombian rebel group FARC...all while leading the government. The Trump admin is offering a $15 million reward for info leading to Marudo's capture or conviction.

Thing To Know: Narcoterrorism. Aka when cartels or other organized groups use drug trafficking to fund politically motived terrorist activities (think: bombings and kidnappings).

Who's decided to play nice...

This new duo. Yesterday, Israeli Prime Minister Benjamin Netanyahu and his chief rival, Benny Gantz, called a truce and agreed to form an emergency unity government to tackle the coronavirus pandemic. Reminder: Netanyahu and Gantz went head-to-head in three elections in less than a year. But neither managed to form a majority coalition gov. Now, it looks like Netanyahu gets to keep his seat and Gantz will serve as parliamentary speaker...for now. Rumor has it the two could soon start taking turns as PM, an unprecedented move for the country.

Who's stepping up to the occasion…

Airbnb. The company said it's working to provide "free or subsidized" housing to 100,000 health care workers and first responders fighting the coronavirus. Also, Dyson. It's producing 15,000 newly designed ventilators to help with the global shortage. NYU is saying 'happy early graduation' to dozens of fourth-year med school students, in an effort to get more health care workers to help combat COVID-19.

...Oh and these brands are here to remind you what social distancing looks like.

Elton John's turning to living room concerts. This weekend, the singer wants you to feel the love as he hosts a star-studded, socially distanced benefit concert to raise money to combat COVID-19. Save the date for Sunday 9pm ET.