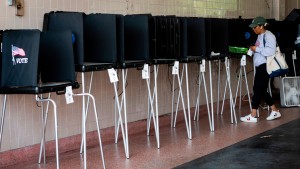 Against the odds, Wisconsinites are expected to vote today. In person.

For weeks, Wisconsin lawmakers debated whether to delay the state's primary election because of the coronavirus outbreak. And despite issuing a stay-at-home order last month, Gov. Tony Evers (D) seemed reluctant to take action on his own. That is, until yesterday.

He issued a last-minute order delaying the election until June. But then the state's conservative Supreme Court said 'not so fast.' It blocked the order, putting the election back on. That's not all: the US Supreme Court weighed in, too – and said no extension for absentee voting, either.

Why is delaying an election so controversial?

To many, it's not – it's a question of safety. Wisconsin has more than 2,400 confirmed cases of COVID-19 and more than 70 deaths...and the virus is spreading. But what happens in one state may not stay there.

Democrats and Republicans are already discussing whether to prep the November election for an entirely mail-in situation. Some Dems see adapting the electoral process in light of the virus as a question of safety, end of story. But some Republican critics are worried about the federal gov overstepping into states' rights to run elections...and see mail-in as a process that tends to benefit Democrats electorally.

Got it. Also, this has to be a weird time to run for office, right?

Yup. And everyone is having to adjust. President Trump has moved his campaign online. But he's managed to reach the public through daily press briefings that have come with a bump in approval ratings.

And on the Dem side?

Former VP Joe Biden is still on track to get the Dem nomination, now set for August. Meanwhile, Sen. Bernie Sanders (I-VT) would need more than 60% of the remaining delegates to replace him...which isn't looking likely. Both have had to get creative, with things like online rallies, virtual happy hours, charity events, and even a podcast.

More than a dozen states have delayed their elections in response to the coronavirus...but Wisconsin isn't one of them. Now, many in a key swing state will have to choose between exercising their right to vote...and their safety.

Here's a term you may or may not have heard of: wet markets. They're known to sell common and exotic animals – dead or alive – for human consumption. Many in developing countries rely on these markets as a key source of livelihood. But yesterday, the UN's biodiversity chief reportedly called for a global ban on them.

That's because some experts think the novel coronavirus first appeared in a wet market in Wuhan, China – when the virus may have crossed from animals to humans. It wouldn't be the first time: the 2002-2003 SARS epidemic was traced to a wet market in China, as was the 2013 bird flu. Now, officials around the world – including US politicians – are calling for a crackdown on these markets to help prevent future pandemics.

In February, China issued a ban on wildlife markets. But some worry the ban doesn't go far enough, since it still allows these animals to be traded for medicinal purposes. Already, some wet markets have reportedly reopened in China. It's raising concerns that we're witnessing another failed attempt to take action before it's too late.

Cardinal George Pell. Yesterday, Australia's highest court overturned his conviction on sexual abuse. In 2018, Pell was found guilty of sexually assaulting two boys. And last year, he was sentenced to six years in prison. Now, the court said 'never mind' – the jury that convicted him relied on only one witness and should have "entertained a doubt" about whether Pell was guilty. The reversal has key implications: Pell was an adviser to Pope Francis and the highest-ranking Roman Catholic cleric convicted of child sex abuse. Now, he's been freed from prison, and the Catholic Church is reportedly expected to drop its investigation into him.

Who's getting 'get well soon' cards…

Boris Johnson. Yesterday, the British prime minister was moved to the ICU after his symptoms from COVID-19 "worsened." Johnson had tested positive for the virus late last month and said he was experiencing "mild symptoms" including a fever. Now his team said he had received "some oxygen support" but was not on a ventilator. And was moved to the ICU as a precaution in case he needed ventilator support. In the meantime, UK Foreign Secretary Dominic Raab is handling PM duties.

...Oh and speaking of punts, the Pro Football Hall of Fame just announced its 2010s All-Decade Team. Guess who's on it.

When you're feeling lonely...