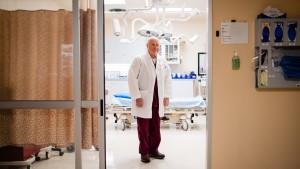 After sweeping through coastal cities, the coronavirus outbreak is now being felt in rural America.

As urban areas like NYC, Seattle, and LA are nearing or have hit their peak, COVID-19 infections have started to grow in small farming and manufacturing towns across the US. More than two-thirds of rural counties have reported at least one known COVID-19 case. And one in 10 are reporting at least one death. Those numbers are only expected to grow.

Exponentially. Which is coming as an unwelcome surprise to residents of these small communities. Some believed their town's isolation and remote lifestyle would protect them. But this virus spreads quickly and with travel between urban and rural areas, the spread of the virus was inevitable. It also hasn't helped that as many as eight states have yet to impose a stay-at-home order.

The problem is that these growing infections have put rural America in a dangerous situation. Rural areas tend to have an older and poorer population. And older residents are more likely to have underlying conditions (think: high blood pressure, diabetes, or heart disease) – putting them more at risk of falling severely ill from COVID-19. Many also lack health insurance or access to proper medical help. Since the beginning of the outbreak, rural hospitals have had to postpone nonessential surgeries or procedures and have lost a critical source of income. Some of them have been forced to close. Just like the rest of the country, these hospitals are also suffering a shortage of PPE, ventilators, and medical staff.

As bad as the coronavirus has hit some major US cities, the fear now is that it could hit rural communities even worse. But there's hope that the slow spread to these communities has provided them with more time to prepare.

While COVID-19 continues to spread in the US, the gov is slowly trying to get things back to normal.

Yesterday, the CDC said essential workers who've been exposed to the virus can get back to work as long as they follow precautions and don't show symptoms. Under the update, employees have to wear a face mask at all times for 14 days after being exposed and have to practice social distancing. Also, employers need to check their workers' temperature, monitor for symptoms, and send employees home if they're sick.

The new guidelines come as growing evidence suggests that people with no symptoms can still spread the coronavirus. But the gov said the goal is to get the most critical workers back into the workforce in order to avoid a shortage.

As for the rest of Americans, health experts said to continue following social distancing guidelines and not return to normal activities just yet.

Sen. Bernie Sanders (I-VT). Yesterday, he ended his second presidential campaign, calling it a "very difficult and painful decision." Sanders – a self-described democratic socialist – has led the progressive charge on policies like Medicare for All and free college. And is credited with pushing the Democratic Party further to the left for years. Sanders has a loyal base and was once the 2020 frontrunner. But former VP Joe Biden said 'I am the captain now' after winning a majority of delegates on Super Tuesday...and after almost every other candidate dropped out and backed him. Now with Sanders out of the race, that leaves Biden – the Democratic Party's presumptive nominee – set to face President Trump in November.

Linda Tripp. Yesterday, the former White House employee and a key figure in former President Bill Clinton's impeachment, died at age 70. She had battled pancreatic cancer. Back in a simpler time (see: 1997), Tripp befriended then-White House intern Monica Lewinsky and began secretly recording their conversations – in which Lewinsky talked about her intimate relationship with the president. Tripp reported the relationship and the tapes became instrumental in the investigation against Clinton. Her role in exposing the president's behavior was highly controversial. And something she called her "patriotic duty." Yesterday, before Tripp's passing, Lewinsky said "no matter the past" she wished for her recovery. RIP.

Why you may want to dust off your sneakers…

This study. It said aerobic exercise can lower levels of depression and hostility. And that good mood feeling you get after crushing a workout can linger for weeks. Now that you might not be commuting to work, commute to the yoga mat instead. It can help stop those quarantine blues.

What you should pour yourself a glass of tonight...