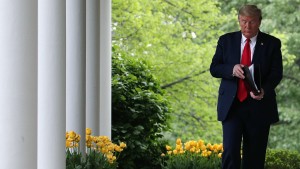 President Trump has laid out a plan for states to reopen.

Trump has been focused on reopening the economy for a while now. And earlier this week, he said he had the authority to decide when that would happen. Turns out, the Constitution says otherwise. Now he's presenting governors with suggested guidelines, but letting them make the call. The measures he's proposing should kick in after states start seeing a decline in cases for 14 days. Then it's a phased approach that goes a little something like this…

Phase One...reopen restaurants, movie theaters, gyms, and places of worship as long as they follow certain guidelines (think: social distancing, disinfecting). And businesses should encourage everyone to still work from home or return to the office in waves, if possible.

Phase Two...reopen schools and daycares. And bring back nonessential travel. This phase would happen once states show evidence that they've had a decrease in cases for a month and there are no signs of a rebound.

Phase Three…remember the old days? This phase looks a lot like it. It's when the state's experienced a decrease of cases for six weeks – and people can do all of the above, plus start visiting loved ones in elderly homes and hospitals again.

What are people saying about all this?

Public health and state officials have warned that more testing is needed in order to reopen the country. And have also called for contact tracing. But Trump – who's faced pressure from Republican lawmakers to reopen – said that in order to maintain the country's health, the US also has to "preserve the health and functioning of our economy."

From what I've seen, the economy is hurting…

Indeed it is. Last week, another 5.2 million Americans filed for unemployment – meaning more than 22 million people lost their job in four weeks. Take a moment to catch your breath. Then figure out what this could mean for you.

Got it, thanks for that.

The gov knows things are bad and is sending millions of Americans stimulus checks to help them stay afloat. While some Americans got their checks this week, many also...didn't. Glitches reportedly tied to tax preparation companies (think: TurboTax and H&R Block) left some people who used those services without money. Also not getting money right now: small businesses.

Yesterday, the gov's $349 billion Paycheck Protection Program ran out of cash, keeping small business owners from getting loans and grants to pay their employees. And the Economic Injury Disaster Loan program also dried up. Now, Congress and the Trump admin are heading back to the drawing board as they figure out additional funding for the small business loan program.

The coronavirus pandemic has clearly done a number on the economy. While the president's new guidelines outline a plan to get it up and running, it's ultimately up to the states to decide what happens next.

As states start to band together to figure out how to reopen their economies, some Americans are getting impatient.

In Michigan, drivers flooded roads and the state capitol, calling for Gov. Gretchen Whitmer (D) to ease restrictions and let them return to work. Last week, the governor expanded a stay-at-home order to help prevent the spread of the coronavirus. While some protesters honked and waved flags from their cars, many disobeyed social-distancing guidelines and huddled together without masks. Michigan law enforcement supported them, saying Whitmer was "overstepping her executive authority" by barring in-state travel and tightening rules on businesses.

Michigan has more than 28,000 known COVID-19 cases and is the third-most affected state in the country. Whitmer – who's now facing at least two federal lawsuits over her state's restrictions – said the demonstrations endangered people's lives.

Meanwhile, hundreds of Americans gathered to challenge their state's stay-at-home order – including in Ohio, North Carolina, and Kentucky. And more protests are planned in Texas, Oregon, and California in the coming days.

The Trump admin. Yesterday, it loosened regulations on mercury (and other toxic metals) pollution from oil and coal-fired power plants. It weakens a 2012 EPA rule that required power plants to limit such pollutants. Reminder: mercury exposure has been linked to brain damage, learning disabilities, and developmental effects in children and babies. But the regulation has cost the industry billions of dollars a year. And the Trump admin said the cost outweighed the public's health benefits. Now, environmental lawyers are raising flags saying the EPA's new rule will lead to poor air quality.

...Oh and speaking of the environment, researchers say a megadrought in the southwestern US is getting worse because of global warming.

Who's letting you know if you've been punk'd...

Facebook. Starting in the next few weeks, it'll let users know if they've come across false info about the coronavirus. People who interacted with such content (think: liked, shared, reacted to, or commented on) will get a message linking them to the WHO's Myth busters page. This is the social media giant's latest effort to tackle fake news. And comes after the UN warned earlier this week that the world's dealing with an "epidemic of misinformation" about COVID-19.

What's coming together at home…

Skimm More: This new normal has us craving entertainment now more than ever. Our app curates the events worth your time. Download it here.

Who is doing the most with his time...