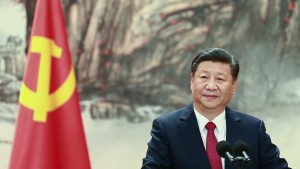 The Chinese government is feeling the heat.

For months, China’s faced criticism for its response to the coronavirus pandemic – including for censoring and arresting those who spoke up about the virus, as well as for allegedly underreporting infections and deaths. While the world tries to combat the virus that’s now claimed more than 183,000 lives and infected over 2.6 million people, some are looking to Beijing to answer questions. Here’s why the country’s been in the headlines this week:

Lawsuits…as in, Missouri became the first state to sue the Chinese gov for economic damages and loss of life brought on by the virus. The state blames China’s “campaign of deceit” for the spread of the outbreak. And Mississippi’s poised to do the same. China’s response: the suit is “absurd.” And it may not go further since foreign countries are typically immune from US prosecution.

Fake news…as in, remember those fake texts last month warning of a national US lockdown? Well, US intel officials have reportedly linked Chinese agents to them. While they’re still not sure who started the messages, US officials think China took a page out of Russia’s ‘how to spread misinformation’ playbook to push the messages online and via texts.

Lab rumors…as in, the virus was first discovered in Wuhan, China. But this week, the World Health Organization knocked down a theory that it was created in a Chinese lab. A separate theory that it still spread because of that lab has gained traction. That includes from President Trump, who says US officials are looking into it.

Crackdowns…as in, COVID-19 has brought months-long pro-democracy protests in Hong Kong to a halt. But the crackdown isn’t letting up: over the weekend, Hong Kong police arrested 15 leading activists. China accuses them of taking part in unauthorized rallies during the pandemic. But critics see the decision as a “calculated” move to punish activists.

As the world fights the coronavirus pandemic and its economic and health consequences, some are focusing on China. And despite concerns that the focus could fuel anti-Asian racism, US officials are pushing for more government accountability.

What the US wants to keep six feet away…

Iranian ships. Yesterday, President Trump gave the Navy the go-ahead to “shoot down and destroy” them if they “harass” US ships at sea. Last week, those ships were conducting exercises in the Persian Gulf when nearly a dozen Iranian boats got a little too close for comfort (think: some within 30 feet). Cue alarm bells at the Pentagon. Let’s not forget the US and Iran have a rocky relationship, and were on the brink of war earlier this year (yes, that was this year). Although Trump’s latest tweet may up the ante with Iran, it doesn’t change existing Navy policy, which is to defend itself in the event of an attack.

…Oh and, Iran’s not just in the waters. It’s in space too. Yesterday, the country said it launched its first military satellite into orbit.

Which companies are saying ‘oops, let’s maybe fix that’…

Apple. The company said it’ll roll out a fix for a security flaw in its Mail app. A security company discovered the bug, which may have allowed hackers to infiltrate more than 500 million iPhones and iPads. The update could be available in the coming weeks.

Zoom. Yesterday, it said it’s rolling out a new security update for its video conferencing app. It comes after complaints in recent weeks about “Zoombombing” – when uninvited guests crash the virtual party.

Skimm This: Our latest podcast ep explains the problems people have had with Zoom and why their new update is needed now more than ever.

What made Mama Earth proud…

The Florida Aquarium. Yesterday, it announced that it’s managed to reproduce cactus coral – the first time in history that humans have done that. The move is seen as a big step in helping to save the world’s third largest coral reef…and potentially others around the world.

Who’s giving a shoutout to the northern lights, the plants that grow…