Daily Skimm: COVID-19: Where It All Started, Workers' Strikes, and Betty the Weathercat 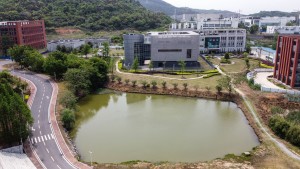 The US intelligence community is ruling out a COVID-19 theory.

That the virus was "manmade or genetically modified." There've been a few theories floating around about the coronavirus's origin, including that it was purposely created in a Chinese lab. But scientists say there's no evidence of tampering in the virus's DNA. And believe it jumped from animals to humans, aka how SARS and Ebola originated. Yesterday, the intel community sided with the scientists. But it left open another theory.

Namely, that it could have been accidentally released from this lab. The institute in Wuhan had been studying coronaviruses for years, and had done research on bats (whose DNA is in the virus that causes COVID-19). The US had flagged potential safety concerns with the lab two years ago. And the lab is close to where the first cluster of cases emerged. But officials there deny it came from them. And China isn't giving outside experts access. President Trump isn't happy.

For weeks, he's been blaming China for the virus. His admin has also reportedly pushed US spy agencies (think: the CIA) to search for evidence tying the lab to the outbreak. CIA officials don't think they'll be able to settle the theory either way. Still, Trump said yesterday he's seen evidence indicating the virus came from a lab. No word on what the evidence was.

It's important to know where the virus came from to help prevent similar outbreaks. But in this case, experts warn we may never learn the answer. Now, while some theories have been put to bed, the US is risking its relationship with China to press hard on others.

Unemployment. Yesterday, the Labor Department said another 3.8 million Americans filed for unemployment benefits last week. That brings the total to more than 30 million in six weeks – more than 15% of America's workforce. But that number could be higher, as some people may have not applied and others couldn't access state unemployment agencies. Economists have said we're in a near-certain recession.

May Day. Today, workers from some of the country's biggest retailers are expected to protest. These happen every year on International Workers' Day – but this year, employees at places like Amazon, Walmart, Target, FedEx, and Whole Foods are planning to turn out over issues like sick leave, pay, and what they describe as a lack of protections amid COVID-19.

Psst...see what high unemployment could mean for your income and investments (even if you're still working) here.

Who's bringing the drama off-screen...

AMC Theatres and Universal Pictures. Weeks ago, Universal released a kids movie on-demand, raking in nearly $100 million. It was pretty pleased with itself, and said this week it would keep sending movies to people's small screens in the future. Plot twist: that didn't sit well with AMC. It responded saying it won't be playing any of Universal's films anymore, even when its theaters reopen. Universal tried to do damage control but didn't back away from the idea of continuing to release movies on-demand. Get the popcorn ready – sounds like the setup to a sequel.

Where the moon is the limit...

NASA. Yesterday, it announced that three companies – Blue Origin, Dynetics, and SpaceX – will be helping out with its Artemis program. Aka landing astronauts back on the moon beginning in 2024. It would mark the first time the US came back to visit since the 1970s. And this time, it would be one big step for womankind, too.

...Oh and speaking of things gearing up, NASCAR. It's heading back to the races next month, this time without the crowds. Vroom.

What won't be taking the 1am train going anywhere...

Whose time to shine is meow...