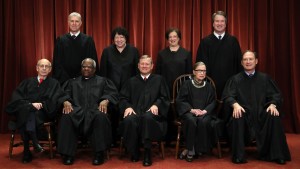 The Supreme Court held its first oral arguments by phone.

Fine, considering it was the first in the court's 230-year history. They spent a little over an hour on a trademark case. Justice Sonia Sotomayor surprised everyone by apparently going on mute. Justice Clarence Thomas surprised everyone by not. Jury's out on whether the Supremes chose to wear robes. But don't worry, if you missed it yesterday, there's more where that came from...

Tomorrow: Can employers get a religious pass and avoid providing birth control coverage as part of their health insurance plans? Courts had blocked the Trump admin from allowing employers to skip the Obamacare requirement. Now, the conservative-majority bench will hear from both sides.

May 12: Can a sitting president (hint: President Trump) block the release of his financial records? The high court's considering three cases, including alleged hush-money payments and whether Trump lied on his financial records to reduce his taxes. Trump has denied any of that happened.

May 13: Can members of the Electoral College cast a vote that is different from their state's popular vote? This case focuses on whether "faithless electors" can be among the 538 electors who pick the president. Just in time for November.

Yup. They're among the 10 cases SCOTUS will hear over the next two weeks. The topics include religious freedom, whether robocalls are protected by the First Amendment, and whether states can prosecute crimes committed on tribal land. Make sure your WiFi game is strong so you can listen in.

COVID-19 has put the Supreme Court in uncharted territory. And while it adjusts to its new format, it's giving the world an inside look at how it conducts business and how it may decide on some monumental cases.

The FDA. Yesterday, it scaled back last month's policy that allowed companies to sell antibody tests without the agency's review. The goal had been to speed up a test that may or may not be key to reopening the US economy. But out of more than 100 companies that got the green light to go to market, few have delivered consistently accurate results. Now, the FDA is saying, 'time to update' – and giving the companies 10 days to get emergency authorization.

Who's giving 'thank you' speeches...

The 2020 Pulitzer Prize winners. Dozens of academics, writers, and editors just decided who they think is the best in journalism, poetry, fiction, and more. They're recommending Colson Whitehead's "The Nickel Boys" as your next fiction read. And an ep from "This American Life" for their new audio reporting category. The New York Times won the most journalism prizes (three), including for Nikole Hannah-Jones' essay in "The 1619 Project." And Ida B Wells got some long-overdue recognition for her groundbreaking coverage on lynching in the 1890s.

Don Shula. Yesterday, the former NFL coach died "peacefully" at age 90 in his home. Shula coached the Miami Dolphins for 26 years and was inducted into the Pro Football Hall of Fame. In 1972, he led the team to the league's only undefeated season. In his tribute, NFL Commissioner Roger Goodell called Shula "one of the greatest coaches" in football history. RIP.

While eyes are on Jedi-Jedi Rabbit…

Someone let Nicolas out of his Cage.